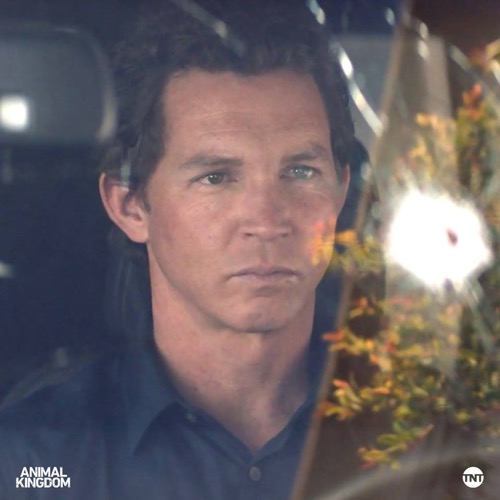 Tonight on TNT Animal Kingdom premieres with an all-new back to back Tuesday, June 19 season 3  episode 4 Animal Kingdom recap called, “The Center Will Hold.” On tonight’s Animal Kingdom season 3 episode 4 as per the TNT synopsis, “With the cops on their tail, the Cody boys try to pull off their first heist without Smurf and Baz. They return to find unexpected guests waiting at the house. Smurf demands that J get rid of them as she deals with a problem of her own in jail.”

Tonight’s episode of Animal Kingdom looks like it is going to be great and you won’t want to miss it, so be sure to tune in for our live Animal Kingdom recap at 9:00 PM ET! While you wait for our recap hit the comments and let us know how excited you are about the season 3 episode 4 of Animal Kingdom.

Mia was staying at the house on tonight’s all new episode of “Animal Kingdom”. She said it would be a night or two and it wasn’t. Mia was at the house and Nicky was beginning to get suspicious. She wanted to know why Mia was staying with them because she knew that J’s uncles would all think J was sleeping with her and so J chose to tell her some of the truth. He told her that Mia was part of that gang that J was paying off to protect Smurf behind bars and he warned that they shouldn’t let the others know that’s where all the money was going. J explained that they would hassle if they knew he was helping Smurf and so Nicky said she wouldn’t say anything. She still didn’t like the fact that Mia was at the house and she sure it didn’t like that she had been right when she said everyone assumed J was sleeping with Mia.

They did assumed that and J gave them a smirk in return that basically confirmed this assumption, but with the house with one too many people that couldn’t be trusted, Pope moved their family meeting to the garage. The family had to go over the job. Pope had vouched for J and talked the others into robbing A1 Naturals. It was easy money because it was a drug den and so everyone was in. Pope later had some doubts because he didn’t think it was wise to invite over guests when they were about to carry out a job and he talked to J about that. He made sure J was ready for this and he warned him that he was only going to vouch for him once. There wouldn’t be a second chance and so J assured him that he had everything under control. And that was a lie because there was no controlling Nicky.

Nicky followed Mia to her job and Mia caught her. She told Nicky to wait until she was done with work to talk and so Nicky was off making trouble while the guys carried out a job. They had a plan for it that included the police. The police have been following J hoping that he would be the one to trip up and instead J used that. He walked into a bank with his hoodie up and had Deran call it in as suspicious behavior. The police showed after the detective followed J in and so it was this huge thing with the cops. The cops were all at the bank and across a street a pill mill got robbed. The guys took in a hundred thousand and J gave the guys each three thousand as part of their cut. He said he needed to pay off their bills and so Deran pointed out that he had bills too. He complained until J gave him an extra five hundred dollars and that was that.

J had proved himself by being right about the pill mill and he didn’t need to explain himself. The others decided to keep quiet and they were all returning to the house when they noticed a strange car in the drive. The guys got out and went to the car, but it wasn’t the police waiting for them or even an enemy. It was Deran’s father. The older man returned to town once he knew Smurf was in prison and he brought along his girlfriend too to introduce her to Deran. Deran wasn’t that interested in getting father now that he was older and so he ditched the get-together before long to return to his bar. This should have been the clue to Deran’s father that he wasn’t wanted and instead he stayed at the house.

Pope for one didn’t want him around because he remembered the guy was a jerk when he had been with Smurf and so he told the others to get rid of him however Craig and J for that matter had no idea who this guy was or how to get rid of him. They were waiting around at the house while Nicky was at the bar with Mia. Mia convinced her to drink a few and a drunk Nicky was very talkative Nicky. She told Mia all about how the Codys don’t get out of bed unless the job was for a hundred thousand and after she got really drunk she asked Mia what she was to J. Mia alluded to the truth and then said that Nicky should stop trying to be what she’s not. She also told Nicky that she should make a play for that Marine that showed interest and so Nicky decided to do just that.

Nicky slept with a stranger and she was honest about it to J by the next morning though he was still pissed. He didn’t let Nicky see how angry he was and instead chose to lash out when he was alone in the car. J had gotten so caught up that he didn’t try to get rid of the two burnouts that crashed by the pool and so Pope became angry when he saw that Deran’s father was still around. He told Craig that he should have gotten rid of him and Craig said that Deran deserved the chance to get to know his father. Pope hadn’t been happy about that and he became angrier when he saw that Craig stole a bag of the place they robbed. He thought that was a mistake and then tried to find out why Deran’s father came back now all of the sudden.

He wasn’t get anywhere by searching the man’s car, but he was going to get rid of him and J received a confirmation later on from his grandmother that the man couldn’t be trusted.

Smurf warned J that the wolves were circling.