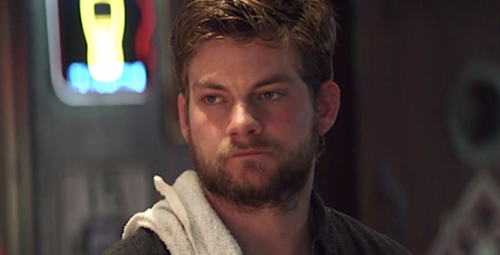 Tonight on TNT Animal Kingdom premieres with an all-new back to back Tuesday, June 26 season 3  episode 5 Animal Kingdom recap called, “Prey.” On tonight’s Animal Kingdom season 3 episode 5 as per the TNT synopsis, “Deran gets to know his father Billy and helps J with a dilemma as Pearce closes in on Smurf’s laundering operation. Craig uncovers a secret that sends him to Smurf.”

Tonight’s episode of Animal Kingdom looks like it is going to be great and you won’t want to miss it, so be sure to tune in for our live Animal Kingdom recap at 9:00 PM ET! While you wait for our recap hit the comments and let us know how excited you are about the season 3 episode 5 of Animal Kingdom.

The return of Deran’s father isn’t over going over so well with the family on tonight’s all new episode of “Animal Kingdom”.

Billy didn’t even bother calling before he showed up with his drugged out girlfriend and neither of them seemed like they ever wanted to leave. They were spending their days hanging out by the pool and Billy, for one, wasn’t even trying to reach out to Deran. Deran was supposed to be the whole reason Billy came back and the men haven’t seen each since Billy showed up that first night. Deran’s family talked about it amongst themselves and Pope wanted Billy gone. Billy wasn’t a good guy and he could have had a relationship with Deran if he really wanted one. It wouldn’t matter if Smurf made things hard because Pope was around back then and he knew that Billy could have found a way.

The others disagreed! Craig thought Billy should get the chance to know his son and vice versa. Neither Craig nor Deran grew up knowing who their fathers were and so Craig wanted Deran to take advantage of this opportunity, but Deran didn’t want anything to do with his father because he agreed with Pope. It was a little too late to rewrite history! Deran was avoiding his father and so he hadn’t wanted to go over to the house. He wanted to aboid the place and he would have if he hadn’t needed help. Deran pays his employees in cash and his whole plan on cutting down costs went up in ruins when one of his former employees filed for unemployment. It alerted the government that Deran was practicing some shady dealings and so Deran needed help.

Deran needed cash and he also needed a better understanding of how to properly treat employees. He didn’t know that Smurf paid taxes for him and that she gives a W2. Deran had no clue what was going on behind the scenes and so J offered to walk him through some of their financial situation when he got a call. Smurf called J because she needed J to come see her right away. She found out from the detective that was looking into her that J had been seen taking out money orders from various places of businesses all throughout California and she needed to warn him that he was still under surveillance. Smurf thought J would race to her side once she told him she had to see him and instead she saw Craig first.

Craig had made plenty of mistakes in his time. His recent mistake with Billy aside, he also made a crucial mistake several years ago when he was driving under the influence and crashed a car with several passengers inside. One of those passengers had been a little brother of a friend and he had gotten badly injured. His surgeries were over a hundred thousand and he needed physical therapy afterwards for two years. Craig hadn’t known about any of that because his mother had taken care of it for him. She had paid off the older brother by giving five thousand every year towards the charity for the young man that was injured because of her son. Craig recently learned that J had stopped payment on the donation because they could no longer afford to do it.

Craig had gotten upset by that and he had tried to go see J except J hadn’t been at the house. Billy on the other hand was there and he asked Craig what’s wrong. Craig explained that J had been left in charge of Smurf’s affairs and that he needed to see J because he stopped something his mother always does however Billy suggested that Craig goes to see his mother in prison because Smurf would still be able to handle the problem. Craig decided to follow this advice and he went to see his mother in jail for perhaps the second time. Smurf couldn’t help saying its been so long since she last saw him and so Craig decided to just come right out with it. He told his mother that she wasn’t paying off Carter and then told her J stopped it. She hadn’t known that and so she said the problem would be fixed in no time.

Craig also asked why she put J in charge and Smurf had a good laugh at him. She asked him what makes him think J was actually in charge. So by time Craig went back to the house, the money was left for him on his bed. He then took the money to Carter and Carter was like just pay next time. He didn’t care that Craig hadn’t known what was going on and he hadn’t wanted to catch up because he said this was the first time Smurf didn’t have to clean up after her one of boys. When the truth was she did have to do just that. Smurf talked J into handing over the money and she asked J to be extra careful. J then went around to all of their renters making sure they knew what amount to report to the police if they were ever asked and he found a problem. There was this old lady who was suffering from dementia and she couldn’t remember to lie for them.

J thought she would be a problem for them and so he took her to Deran. Deran drove the old lady out to the middle of nowhere and left her with her cat. He got rid of the car afterwards and so there was still a few things J could learn from his uncle. Deran wasn’t exactly the smartest one of the lot and that meant there were still a few things that was wrong with he family, but Deran felt better about helping J and he had been in a good mood when he later saw his father. The two men have decided they could bond over shared beers and Deran ignored his father when Billy asked why J had been left in charge. And so everyone was fine with returning to the house, except Pope was still angry.

He didn’t want Billy at the house and Lena was acting out as school, so Pope decided to leave the impromptu family get together and just go home. But Billy was still and so was Mia. Mia had pretended to be there for Nicky and had listened as Nicky told her that she had even tried to join her family overseas. Her parents didn’t want her with them because they had moved on with their lives and wanted the same for her. So Nicky was depressed and the only person she thought she could talk to was some dangerous outsider.

The family continues to face problems without Smurf