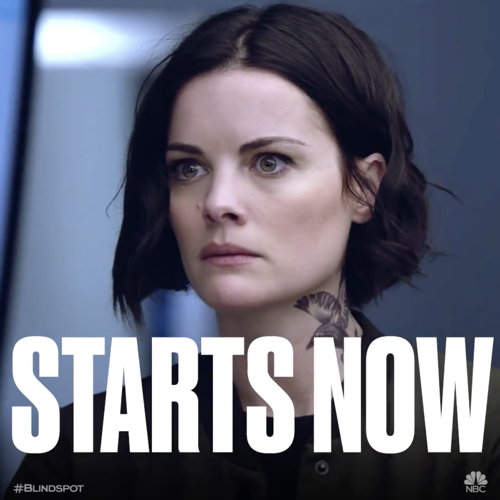 Tonight on NBC Blindspot airs with an all-new May 18, 2018, episode and we have your Blindspot recap below.  On tonight’s Blindspot season 3 episode 22, “In Memory,” as per the NBC synopsis, “Jane is forced to recruit someone from her past to help take down a dangerous alliance.”

Zapata and Reade slept together. They’ve both denied having feelings for each other in the past however things changed between them since Reade almost married someone else and Zapata was fired. They realized they should be happy while they could and so they slept together. It was supposed to be one night without questions and it instead became something else. They talked the next morning and had even talked about getting breakfast until Reade got that text from work. The text had been from Patterson and she claimed to have deciphered the last clue they had from Roman. Roman had disappeared following the failed attack on the U.N. and so Reade had to go into work to hear more from Patterson.

Reade hadn’t liked leaving Zapata behind because he thought she deserved to go with him though it turns out that he left her alone allowed her to think about a few things and so she told him they should stop whatever it was between them. She later said that they couldn’t start when her whole world was falling apart and that they should again at a different time when they both could put in the same effort. Reade hadn’t liked hearing that because he thought they could build the relationship no matter the circumstances and that meant the two parted less amicable than two years ago. At least back then, Reade had been dealing with a drug addiction and so this time around they didn’t have that for why they couldn’t be together.

Yet, Reade tried to focus on work. He heard from Patterson that Roman had hidden three words in a quote from the “Count of Monte Cristo”. It was literally “What, “Three”, and “Words”. It also wasn’t in the original quote and so Patterson linked them to a location. The location was in South Africa and the team wanted to race there right except they couldn’t because of Crawford. Crawford used his own daughter to create a diversion and then fled the country because he took was also after Roman. Roman had failed him and even a man like Crawford was bound to notice that the feds hadn’t started looking into him until Blake’s new boyfriend entered the picture. And so Crawford was going after Roman to kill him.

Roman knew this and the FBI had easily figured it out. They thought they could use the fact Crawford would kill Roman and so they tested their theory with Blake. Blake was told that she had to choose between “Tom” and Crawford because Crawford had used her boyfriend to do his dirty work and “Tom” could spend the rest of his life behind bars. They told Blake she had to choose and so she chose “Tom”. She told them how her father escaped the country and then she made a deal with her boyfriend in which he wouldn’t have to face jail time not knowing that Roman always would. Roman lured Crawford out and took him with him back to South Africa, where everything between them began.

Hank Crawford had said something a few months ago that had always plagued Roman because Roman had been one of the few people that knew what it really meant. He remembered Crawford wanting to build an army that had no allegiances to any one nation and Roman knew that Crawford tried to build such an army. It tried to build one using the orphanage he had in South Africa. He put a bunch of children in an orphanage and made every day for them a living hell so that only the “strong” survived. Roman and Jane had gotten sent to that orphanage and it turned them into killers. And therefore Roman had brought Crawford back to the orphanage because he had a few questions.

Roman wanted to know what how much Crawford knew about the conditions and he promised to give the man a clean death if he answered honestly. So Crawford told him he knew. He knew everything to the last detail because he had been trying to build an army and so he told Roman how proud he was. He could see that Roman was the greatest thing he ever created and he hadn’t even been angry at what Roman did. Crawford said that he could see how much Roman loved Blake and that they could create a family, all that he asked was that Roman made a run for it while he could and Crawford had even promised to hold off the FBI.

Crawford used the gun Roman left behind and he threatened Jane with it knowing Jane would shoot him, but as he laid dying he admitted that Roman made sure to take the bullets. Roman had cared enough about his sister not to want to hurt her and so Crawford did thing his way because he thought Roman would be safe afterward. And unfortunately, he had been wrong. Roman had met with Blake who showed up in South Africa and he told her that he wanted to start a whole new life with her though she ended up shooting him. She found out he was Roman from Zapata and had left Roman dying because she was suddenly working with Zapata now. And if that wasn’t tragic enough, Jane found her brother and he gave her something before he died.

He gave her a USB and not only could it help her solve each and every tattoo, but it also showed what he was and now his sister was suffering from. They were suffering from ZIP poisoning when their memories had been wiped and so now it was killing Jane. and before it could kill her, it made her forget the last couple of years and therefore she believed she’s still Remi who’s supposed to bring down the FBI.