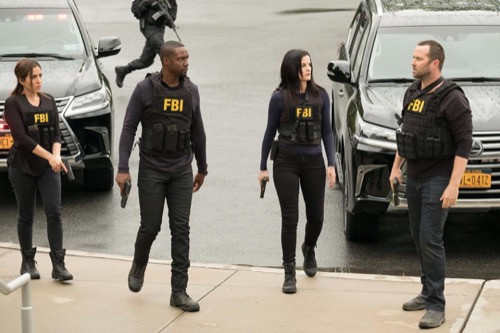 Tonight on NBC Blindspot airs with an all-new May 11, 2018, episode and we have your Blindspot recap below.  On tonight’s Blindspot season 3 episode 21, “Defection,” as per the NBC synopsis, “Jane is forced to recruit someone from her past to help take down a dangerous alliance.”

Reade’s fiancé had broken up with him on tonight’s all-new episode of “Blindspot”. Meg had wanted to know if the reason Reade hadn’t told her that Zapata said she was in love with him was that he hadn’t wanted to admit to himself that he still had feelings for her and Reade couldn’t answer her question. Meg had always suspected that there more to Reade and Zapata’s relationship. She had heard the stories and had tried to downplay them because he had asked Meg to marry him however they’ve both had their misgivings about marrying each other and Meg just happened to the first person to say them out loud.

Meg knew that Reade had asked her to marry him because she was undocumented and so she told him that she didn’t need to be married to an American citizen to come forward with her story. She was a journalist and she was willing to take whatever risk she needed to be honest with her readers, so she was doing the honorable thing. Meg was letting go because she knew that he deserved more and he hadn’t been bitter. Reade had told Zapata that she hadn’t played a part in what happened and he had carried on with his life as well as with his work. Reade and the team had found out that Avery’s godmother was in deep with Crawford.

Crawford had lost his weapon. The FBI had destroyed it and Roman had even killed the man that made it. Which meant the machine couldn’t be recreated and so Roman had had to think up something fast in order to replace what was destroyed on his watch. He had struggled to do so because he was still getting headaches and having hallucinations, but Roman eventually decided to go with a plan he had come up with years ago. He had created the plan for Shepherd back when she needed a weapon for Sandstorm and Shepherd had to turn down her son’s proposal. She thought it had been too complicated and that he should leave the plans to her.

Roman had resented that at the time and so it his sister had stepped in to comfort him. She told him she thought his plan was good and that maybe they could use it later on. Roman had remembered that and that’s why he turned to his plan for a hypergolic bomb. He had used Crawford’s connection to get his hands on one of the chemicals he needed and his actions raised a red flag for his sister. Jane had been with the team when they took down Lynette and, while they hadn’t gotten her to talk back then, they did get their hands on her laptop. Her computer showed she had gotten the access codes to some of the most secured buildings in NYC and so they all caught on when Roman broke into one.

They were ones of the first to learn an industrial cleaning company had gotten broken into and what had been stolen, so that made everything click for Jane. She realized Roman had fallen back on an old plan and she couldn’t remember the full details. Jane just recalled that Roman needed another chemical and the name of it. The others had filled her in on what those chemicals create and so she tried to remember the rest of Roman’s plan. He had might have mentioned something to indicate where he would steal the other chemical and no matter how hard Jane tried she couldn’t recall it.

Jane said there was only one person that could them and that it was Shepherd. Shepherd was still in CIA custody and so they had her brought in yet Shepherd hadn’t wanted to talk to Weller. Weller had merely been a means to an end and so she actually wanted to talk to her daughter Jane. Jane hadn’t really wanted to do it and she had just gone along with it because they needed answers. She sat down with her mother and listened to Shepherd told her how sad she was about Jane and Roman falling out. The siblings used to be so close, she said. Shepherd also added that she regretted trying to come between them.

Shepherd said that the two were all each other had back when they were at that orphanage and that she had to pit them against each other so that there would be room enough for her. Shepherd would have kept going if Jane hadn’t interrupted her and made her get to a point. Shepherd told them what company was going to be hit and so all they had to do was figure out the target. They did that by essentially threatening Lynette. Lynette had used her wife’s access card to get the information for Crawford and so her wife could go to jail if Lynette didn’t tell them what they wanted to know. And so the team were able to put the pieces together.

They realized that Roman was going after the United Nations and they had the building cleared. They also went looking for the bomb and they managed to diffuse it in time, but that had been one part of the plan. The other part had been to kill two world leaders. The leaders were discussing a pipeline that would through their counties and bring untold wealth to everyone involved. There was just one problem – Crawford owned land bordering the two counties. He wanted to invest in the pipelines to gain billions and was forced to find another way when they both cut him out. So that’s why he tried to kill the world leaders.

Crawford only believed in violence when it was a means to an end and killing the leaders of two countries in Africa would have been that for him. However, the FBI safeguarded the leaders and they once again managed to thwart Roman. Roman was getting desperate because he kept failing and so he wanted to figure out what to do next before Crawford threw him away through the US had all they needed to press charges against Crawford and so they were going to take him down. It might be some time before they could carry it out because he owned land everywhere and so they tried not to make that deter them.

But there had been some unfortunate news. Zapata had stolen something from the scene for the CIA and CIA disavowed her when she got caught. They claim she acted on her own and fired her because she supposedly couldn’t be trusted. She knew that crap and her friends knew that was crap, only they couldn’t fight the charges and so Zapata said she wasn’t going to take down her friends with her. She left the team and later on she went over to Reade’s apartment because she figured there was nothing stopping them from acting on their feelings now.