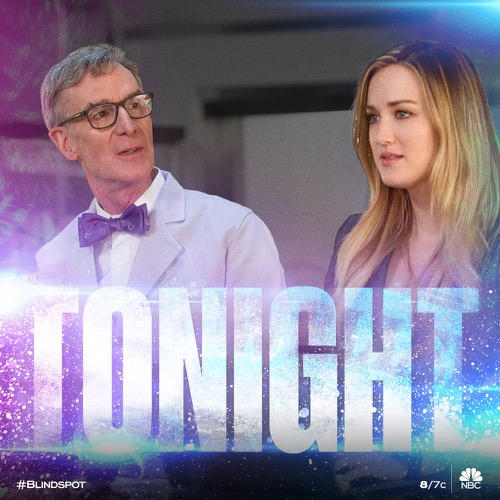 Tonight on NBC Blindspot airs with an all-new May 4, 2018, episode and we have your Blindspot recap below.  On tonight’s Blindspot season 3 episode 20, “Let It Go,” as per the NBC synopsis, “After receiving shocking news about Avery’s father, Jane and Weller must hunt down an elusive criminal. Meanwhile, Patterson’s father helps the team (and his daughter) in the lab.”

Crawford’s grand plan was at risk of unraveling on tonight’s all-new episode of “Blindspot” because the FBI destroyed the sonic weapon.

The sonic weapon was supposed to be the new “shot heard around the world”. Crawford had been planning on using the sonic weapon to start some sort of war and his plan to use this war to enrich himself was at risk because the FBI had found out about Ganzman. Ganzman had created the sonic weapon and with him dead there was zero chance that Crawford could create another weapon capable of burning the world down, so Crawford needed to find another plan and Roman had said that he could come up with one. He asked for a day to initiate Plan B and he got twelve hours instead.

Roman said he could fix everything. He told them that he could come up and implement a plan before their entire schedule was thrown off however Roman had been lying. He hadn’t planned and to make things worse his mental condition hadn’t gotten better. He was still suffering headaches as well as hallucinations. Roman would imagine seeing his sister and she would tell him how he wasn’t good enough or that his plan would never work. She was basically a manifestation of his own doubts and so Roman’s condition was pushing him into acting on impulse. He wasn’t thinking things ahead liked he usually did and was, in fact, scrambling to fix things.

Roman was trying to stop the FBI before they could ruin his new family and it turns out he set things in motion that he couldn’t stop. He used to help the FBI on their mission and so he gave them a clue that he hadn’t been able to stop. Roman had dug up and dumped Robert Drabkin’s in the body in the harbor because he wanted everyone to see that Avery’s father hadn’t killed himself. She thought he had because she had seen the suicide note and so Drabkin’s body showing up had put that to rest. He hadn’t committed suicide and there were several gunshots to his chest that indicated he was murdered.

Drabkin had been in Crawford’s inner circle and he had been in on everything. He knew who Crawford was secretly meeting with and Crawford knew he could trust him because he had evidence on Drabkin that could have put him away for life, so it had been a good partnership till suddenly Drabkin reportedly killed himself and so with that ruled out there was a chance that Crawford killed Drabkin. Drabkin might have made a mistake or betrayed Crawford’s trust and so the team had Drabkin’s body brought to them. They wanted to see might have been on it or hidden inside of it and so they got their hands on Drabkin.

Drabkin’s wounds had been extended yet he also had a tattoo placed on his neck that matched Jane’s and so they looked inside Drabkin’s throat. They found a key hidden inside and there were symbols on the key that Patterson later identified as the mark for notorious hitman Charon. Charon was notorious because no one had ever seen him or met him for a job. He simply took his marching orders from a dropbox and that’s how he was paid. So the team decided to use Roman’s last clue to take down Charon. Charon could be lured out with the prospect of a new job and so the team used his drop box.

They got Charon out into the open and they almost arrested though unfortunately, he hadn’t wanted to go down without a fight and so he pushed Jane into killing him. She hadn’t wanted to do that because she wanted answers on who hired him and therefore she blamed herself for killing the one concrete lead they had to Crawford. The team figured Crawford had Drabkin killed and if they had been able to convince Charon into testifying then he could finally have given them a way to take down Crawford. Crawford had caused so much harm that Jane promised her daughter that she could bring him down.

Avery had been told everything. She knew about her father’s suicide not being a suicide and so she talked to her godmother, Lynette. Lynette had been responsible for Drabkin’s estate while Avery was underage and Avery had continued to allow Lynette to handle everything because she trusted her godmother who had acted as a second mother to her. Lynette on her part had been concerned when Avery told her everything she found and so she asked Avery if she wanted to come over to view her father’s papers. Avery hadn’t been sure if she wanted to or not and the only reason she ended up going was that Jane had agreed to go with her to offer emotional support.

Avery and Jane were still working on their relationship and they’ve gotten a lot better at communicating, so they went over to Lynette’s believing everything was going to be ok and unfortunately they walked right into a trap. They hadn’t realized that they did that until Avery was about to sign the papers and noticed that Lynette had the same pen as her dad. Drabkin had gotten a pen from Crawford for ten years worth of good service and so Avery knew Lynette could only have gotten that same pen from Crawford as well. She confronted Lynette over the pen and Lynette’s people moved in to capture both Avery and her mother.

Jane had thankfully only gotten a graze and so she was able to keep her and Avery safe until the rest of her team arrived. The others had cracked Charon’s code and found out Lynette had been the one to order the hit on Drabkin. So the team and even Avery had all confronted Lynette, she had been prepared to apologize to Avery for what she did and so what she couldn’t do was turn on Crawford. Crawford was still too dangerous to take on directly and that made the team believe they would never figure out what was his next move. And so they didn’t know they had a goldmine on their hands until Patterson had her father, Bill Nye the Science Guy, help her decode Lynette’s laptop.

Lynette, it seems had access codes to every important building in New York and so everyone knew without even looking at each other that Crawford would push to use those codes while he still had them.

So that play into the plan Roman eventually came up with!