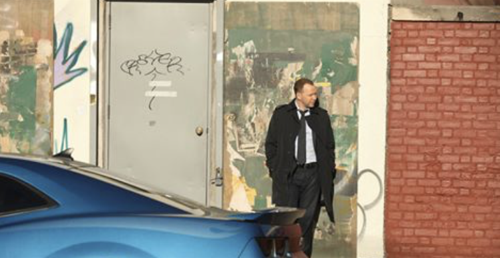 Tonight on CBS their hit drama starring Tom Selleck Blue Bloods airs an all-new Friday, March 30, 2018, episode and we have your Blue Bloods recap below. On tonight’s Blue Blood Season 8 episode 17, as per the CBS synopsis, “After Danny’s brother-in-law gets caught up with the mob and steals Danny’s credit card, Danny forces him to take down the mobsters with Baez’s help. Also, Frank has Erin and Anthony investigate if his old partner is truly guilty of a crime; and Jamie is approached by an officer who wants his help getting reassigned from his undercover assignment at a mosque.”

Frank questioned whether or not to help a friend on tonight’s all-new episode of “Blue Bloods” when his old partner got arrested.

Frank used to partner with a man by the name of Lenny Ross. Ross was a fast-talker that could have charmed anyone and so Frank found it very confusing when he learned the same Ross had shot up a strip club one night. He thought didn’t sound like Ross and had even asked Ross why he did it, but that’s the thing. Ross didn’t remember the incident. He claimed that he didn’t remember hurting anyone and that was out having fun one night when the next thing he remembered was being in cuffs. Ross had seemed so genuinely confused that Frank questioned what happened. He thought maybe there had been a misunderstanding and so he went to Erin for a favor. He wanted her as in the District Attorney’s office to investigate the incident on their own to see what happened and so the police department wouldn’t have their actions called into question later on.

Erin hadn’t liked it because she thought she knew what happened and that her father was asking her for this favor because he didn’t want to accept what his friend did yet she agreed to do it. She wanted evidence and had gone to that strip club with Tony because they knew to ask all the right questions. They asked people at the strip club about the night Ross came in and the people there remembered him. They remembered that he bragged about knowing the police commissioner and that he tried using that as a pass to do whatever he wanted which included grabbing the women. The women were there to either dance or serve drinks and Ross had tried to push that boundary by grabbing onto them.

That’s when the bouncer stepped in and the next thing that happened was both the bouncer and one of the women getting shot. Ross shot two people that night because they wouldn’t let him do whatever he wanted and so Erin believed she found all that she needed. Ross had bragged, Ross had made threats, and had Ross had followed through on them. His actions that night, therefore, seemed predatory and Erin believed her case was closed. Frank, on the other hand, was different. He wasn’t ready to give up on Ross and had later had dinner with his old friend because he still had a few questions of his own. He wanted to know why Ross had gone to that club and it turns out Ross thought he was making a deal.

Ross went to the club because he thought he was being offered a chance to buy into it. He said he had been talking to someone named Bobby Z via text and that they were supposed to have a business meeting that night, but Frank found that a little hard to believe because the man he knew wouldn’t have been making business dealing like that and so Ross explained a few things. He told Frank that the only reason he had agreed to that meeting was that Bobby was a partner with Mickey Cardoza who was the youngest son of their old friend Sal Cardoza. The late Sal Cardoza was a cop that used to work with both Ross and Frank and they had even given him the nickname of Sal “Shakedown” Cardoza.

Its safe to say that Sal didn’t always color within the lines and so Frank hadn’t wanted to remember him though knowing that Ross had agreed to go into business with someone recommended to him by Sal’s son had made the incident at the strip club look a little differently. At least it did to Erin. Erin had talked to Mickey Cardoza and he had failed to fill Erin on that connection, so Erin and Tony dug into Mickey Cardoza. He had owned that strip club for a while and it turns out there had been plenty of incidents in which the clients complained they had been robbed or their information was stolen. The report on the strip club was so bad that it had looked like one giant scam and so Erin went back there with Tony.

They rounded up all the women and Mickey yet it wasn’t long before they all started to talk and so that’s when Mickey revealed what really happened that night. It seems he had set up Ross because Ross used to have a beef with his father Sal back in the day and so that’s why he drugged Ross on the night the man allegedly shot up his club. That hadn’t happened and they had even stolen Ross’s watch, so Ross’s name was eventually cleared. Erin just wanted to know what had happened that made Mickey want revenge and so she had gone looking into the records. She thought she finds out everything in their files and she didn’t find a single thing. Erin didn’t see a report about what happened between the two and so she went to her father.

Frank was the only one that could explain what happened and he hadn’t wanted to say anything until Erin pushed because he had wanted to bury the past. He hadn’t wanted to remember how Sal was shaking down drug dealers for money and how Sal had recruited Ross, but Ross had instead worn a wire and had gotten enough evidence on Sal to get the other man arrested. Though that wasn’t what happened. The police had had enough bad publicity in the late eighties that they decided to let Sal retire with his full pension and merely cover up all the crimes he committed. That’s why Ross thought bygones were bygones when he asked to go into business with someone Mickey Cardoza recommended.

Ross knows differently now and Erin could better prepare her case to ensure Mickey doesn’t use the incident with his father to justify what he did though Erin hadn’t been happy with the cover-up and she wasn’t the only one dealing with a headache. Her brother Danny had also had a problem with family. He found out his brother-in-law had used his and his late wife’s information in a credit card scam. Danny had found out that his brother-in-law Jimmy had been working with the Albanian mafia and so pressured Jimmy into helping him take those guys down or he was going to send Jimmy to the hospital. His relationship with Jimmy had always been troublesome and Jimmy knew that he should have done better.

He should have gone to his sister’s funeral and he shouldn’t have used her information to pull off a scam that would not only affect her widower, but also her two sons were going to go to college soon. Except he did best to make up for what he did. He wore a wire and carried out a sting with the Albanian mafia that had almost gotten him killed. And he had surprisingly become a hero of the day by shooting them which slowed them down enough to get arrested. That, of course, hadn’t changed how Danny viewed him only he was now more tolerant of his brother-in-law.

Jaime had also experienced what it was like to be a Muslim American in the NYPD and he saw for the first time that maybe things weren’t as black and white as he thought because his old friend Tariq showed him that things can work out if you work hard enough for them.