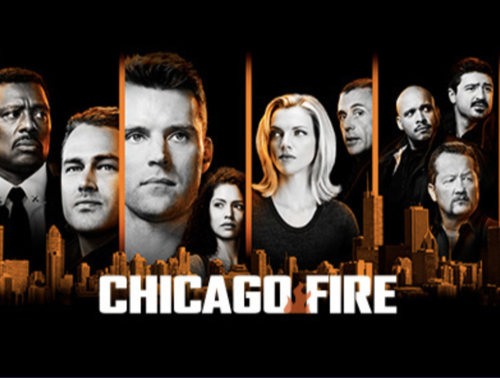 Tonight on NBC Chicago Fire returns with an all new Wednesday, September 26, 2018, season 7 episode 2 called, “Going to War” and we have your Chicago Fire weekly recap below. On tonight’s Chicago Fire premiere as per the NBC synopsis, “In the start of a three-part crossover event, Firehouse 51 is faced with a daunting challenge when an out-of-control blaze consumes a 15-story apartment complex, trapping victims on the top floors. Complicating the rapidly escalating situation, members soon discover that someone close to home may be one of the trapped victims.”

Tonight’s Chicago Fire season 7 episode 2 looks like it is going to be great and you won’t want to miss it.   While you’re waiting for our recap make sure to check out all our Chicago Fire recaps, news, spoilers & more, right here!

Chief Boden asks Emily how it is going, she says that she is just taking it all in and learning everything she can. Casey asks Brett if she is avoiding him, just when the alarm goes off and there is a call. An office tower is on fire and people are trapped inside. Chief Boden says they are going to war. Inside the building, the fire is on the 20th floor for now. People are running down the stairs and starting to panic, some people are falling. Chief Boden starts to send the team up the stairs. Jerry is at the fire and Boden looks annoyed, he explains that he is only there because the commissioner wants him there.

As the guys are climbing the stairs, they find a victim and she is burned bad. Boden asks Casey how things are going and he says they have almost reached the fire. They open the door and the fire explodes out at them. More firefighters head upstairs to help out, but they stay away from the 20th because it is engulfed in flames. Jay Halstead shows up from Chicago PD, he tells Boden that he is worried because his father lives on the 23d floor and has a heart condition. Jerry is downstairs with Boden and questions his judgment on avoiding the 20th floor.

The firefighters are going to one apartment after the other, trying to rescue as many people as they can. Joe saves a woman and her dog, he takes the dog and ushers her out.

Foster and Brett are very busy outside tending to the victims. Boden tells Casey about Jay’s father, tells him to go to his apartment and take a look. Otis is heading down the stairs with a lot of victims, he offers to hold a baby, but the mother says no. Outside, people are gathering and they are trying to keep things calm. Jay’s dad is not in the apartment., but he is still worried. Jay calls Will and tells him there is no sign of their dad, Sharon tells him to leave if he wants to, but he says no.

The woman with the baby disappeared, Otis thinks she went in one of the elevators and they could be trapped. Boden tells everyone to keep an eye out for the woman and her child. At the hospital, Brett and Foster bring in a 19-year-old girl that is burned badly. Brett asks Foster what her story is, she says that until the year before she was a surgical resident at Lakeshore; she went to med school, she cheated on her boards and got kicked out. Foster goes on to say that is not who she is, Brett says she doesn’t have to explain.

Mouch is with a firefighter, his name is Ritter, he took a fireball to the face and seems out of it. Casey tells Mouch to get him downstairs because he is blocking the way and he is useless right now. The guy won’t move and Mouch starts shouting at him to move it. Jay is back inside, he is really worried, he speaks to the concierge who tells him that his father sometimes visits a friend on the 25th floor. The fire is now reaching the 24th floor, the fire is traveling faster than they thought. Mouch is still trying to get Ritter down. Otis got the elevator moving, he is hoping he finds the mother and child inside ok, he does, but they are both dead and burned beyond recognition. Otis goes to tell Boden what he found.

Herrmann is on the 25th floor, there is fire there too. He finds Jay’s father and his friend, he tells him that they are both conscience. Hermann tries to carry one and drag the other out as flames are coming out all around him. Herrmann calls for help just as it arrives.

Jay is outside when his dad comes out. Mouch tells Ritter not to spend his life on ifs, be glad he is out safe and they have rescued a lot of people. Severide is about to leave the floor he is on when he hears a kid named Josh yelling for help.

Casey is out, Brett is with him and asks him how he could just let her go, meaning Dawson. He says he is angry, pissed off, but he couldn’t stop her and neither could Brett. Casey hands Brett a photo of her and Dawson that Dawson left for her with a message written on the back that said she loved her.

Severide arrives on Josh’s floor and gets to both he and his mother. Herrman is trying to contain the fire so Severride can get out but it’s not working. Severride opens a window and tells Josh they are going to do a self-rescue.

Severide tells Kidd and Herrmann to head out of there and meet him on 19 while he takes Josh in his arms and heads down the outside of the building on a rope. Boden and everyone else from the street is looking up and praying that they are going to be ok. Severride arrives at the 19 and breaks the glass in the window, crawls in with Josh. Herrman calls mayday, Kidd ran out of air; they get outside and try to do what they can for Kidd, then whisk her to the hospital, Boden goes with her. Jerry is outside and tries to get in one of the trucks, but nobody stops for him.

At the hospital, 51 is all there and they are waiting for news about Kidd when Severide confronts Herrman and angrily asks how he could let this happen, Herrman said she didn’t tell him because she was trying to save Seeverride. Dr. Choi is with Kidd, she is waking up, her vitals are stable but she is in pretty bad shape.