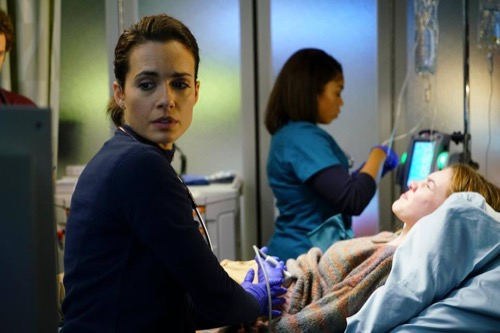 Tonight on NBC their medical drama Chicago Med airs with an all-new Tuesday, January 16, 2018, episode and we have your Chicago Med recap below. On tonight’s Chicago Med season 3 episode 10 as per the NBC synopsis, “After witnessing a drive-by shooting and hitting her head, Dr. Manning struggles with the aftermath of a head injury. Complicating matters, she and Dr. Halstead deal with a teenage patient and her overbearing older husband, who might not be looking out for his young wife’s best interests. ”

Natalie and Barry are outside when they witness a drive-by. They rush to help a man who was shot. As they are down on the ground, the car comes back around and shoots. Natalie hits her head. Barry fires at them with his gun. He gets shot in the leg. Natalie and the others rush him back into the hospital. Natalie says she is fine but she looks shaken.

Will checks on Natalie. She explains she hit her head but she is okay. Connor arrives with his friend Margo. She is having chest pains. He sends her into a room and tells a nurse to check on her. Becker cannot help herself. She keeps making jokes. Connor learns that Margo is married. If he knew he may not have gone back to her hotel room.

A man calls to Natalie and Will outside for help. He opens his car door to a teen girl crying in pain.

Connor is called to the front desk. Margo has cocaine in her blood. Connor explains that he thinks her situation was exacerbated by them having sex. He offers to take a drug test.

The teen girl is bleeding on the bed when Natalie and Will look her over. They learn that the much older man is her husband, not her father.

Natalie and Will talk to Sharon about the teen girl. Sharon tells them there is nothing they can do. Her parent’s consented.

A man named Ben and his wife come in. he yells that he needs to be committed to the psych ward. She tells him to relax. He tells them he is going to murder his wife.

Connor tells Margo she will need surgery to take care of her coronary disease. She wants to go home. Connor tells her she cannot leave. Connor is told he cannot do the surgery.

Natalie tells the teen girl that she has tumors that they need to remove with surgery and chemotherapy. Her husband thinks this is all a ploy to make her infertile.

A man is brought in with a gunshot wound. Connor gets to work trying to stabilize the man who has an oozing artery.

Natalie talks to the teen girl alone. She is afraid to talk to Natalie without her husband there. Natalie tells her by law she can be emancipated. The husband comes into the room and gets angry. He demands Natalie not be allowed to take care of his wife.

Natalie is angry. She tells Will and Sharon that the teen needs to be taken care of. Sharon takes her off the case. In the middle of telling Will that she doesn’t need him to defend her honor, she pinches the bridge of her nose before throwing up.

Sam checks out Natalie. She has a concussion. She tells Will she needs to check on the teen before she is discharged. Will reminds her that she was removed from the teen’s case.

Barry realizes that he was the one who shot the man who was brought in with a gunshot wound.

Will tries to talk with the teen’s husband. He plays nice with the husband before heading to the teen’s room to talk to her alone. The teen girl wants to have a hysterectomy. Will tells her she is so young. She doesn’t have to do that. But the teen explains that she doesn’t want to bring a child into this world.

Barry is brought out of the hospital in handcuffs. Maggie watches in horror.

Sarah meets with Ben and tries to explain to him that most of his thoughts are harmless, caused by the firing of synapses. She asks him to discuss his fears. She opens a towel to show him a butcher knife. She hands it to him. He is holding it in front of her when Daniel comes to the observing window and looks in shock at the scene before him. She tells him that he has conquered his fears of holding a weapon. She tells him to pretend she is his wife. She tells him he has an opportunity. He can slit her throat right now. Ben tells her that he does not want to. He sits back down. Daniel calls her out of her room. Daniel tells her she is acting recklessly. He is angry. She is not invisible.

Sharon calls Maggie in. She reveals that Barry changed his identity to hide a juvenile record. Because of this, the state’s attorney is going to file a charge against him. Maggie cannot believe he lied.

Will is wheeling the teen girl into surgery. Her husband comes in. He wants to know what is going on. He is angry. Will tells him he has her consent and he needs to move out of the way. The husband tells his wife that she will be banned from the church. She smiles as she is wheeled away.

Connor comes face to face with Maggie’s husband. He is thrilled they saved his wife. He hugs Connor.

Will tells Natalie about the teen girl. She is happy while Will is confused. Natalie tells him that women are stronger than he realizes.