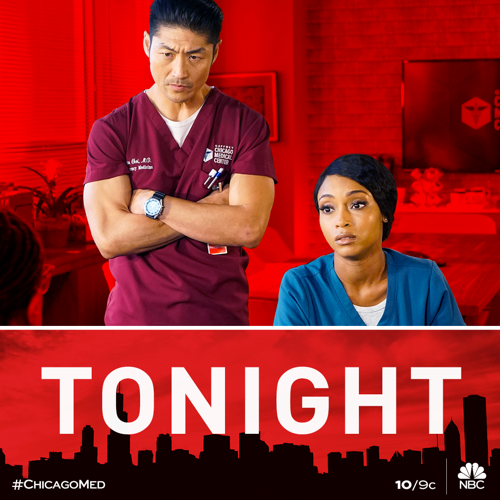 Tonight on NBC their medical drama Chicago Med airs with an all-new Tuesday, February 6, 2018, episode and we have your Chicago Med recap below. On tonight’s Chicago Med season 3 episode 9 as per the NBC synopsis, “After discovering that a patient’s family might have been abusive, Dr. Choi and April contemplate calling child services. Dr. Manning and Dr. Halstead struggle to see eye to eye in guiding a family who is dealing with their premature baby. Dr. Rhodes is persuaded into performing a risky surgery on Dr. Bekker’s mentor and world-renowned surgeon, Dr. Marvin Jaffrey. Meanwhile, Dr. Reese joins Dr. Charles on a visit to the Cook County jail.”

A pregnant woman comes in. She is hemorrhaging. Natalie determines that she is going into labor. Her baby will be born prematurely. There is a chance the baby will not survive.

Dr. Charles brings Sarah into prison. She wants to do her research there. He tells her she can change her mind as they enter the main area where the prisoners are all yelling. She doesn’t want to change her mind. She is sure.

Ava’s former mentor, Dr. Jaffrey, is in bed. She comes to visit him. He has a tumor in his lung. She introduces him to Rhodes. Jaffrey wants them to perform surgery on him awake. Rhodes isn’t comfortable. Ava assures him that they have his consent.

A teenage girl named Deb comes into the ER. She has been abused at home. The doctors consult with Sharon to see what they should do.

The pregnant woman gives birth. The embryonic sac is still in tack. Natalie and Will take him out of the room and realize the baby is still alive. He is kicking in the sac. They head to the NICU.

Dr. Charles and Sarah tell the guard they need to see a prisoner named Hector. He informs them that Hector is a level three.

Rhodes and Ava scrub in for the surgery.

The doctors come in to talk to Deb. They cannot release her without a guardian. She begins to have a seizure. They bring her in for a CT scan. They see something moving in the scan. They use a scope. They pull out a cockroach from her nose.

Sarah and Charles meet with Hector. He is shackled. He leans across the table and barks at her. She jumps. The guards take him away.

Natalie thinks the baby is strong but Dr. Grant disagrees.

Deb has head trauma. She needs surgery. She admits her mom’s boyfriend hit her. She will need surgery.

In surgery, Dr. Jaffrey is wide awake and trying to tell them how to proceed. They have to remind him that he is a patient.

Sharon works to find placement for Deb. They determine that they have to notify children’s services.

Natalie is in the NICU watching over the baby. Will comes in to get an update. The mother comes in seconds later. She sees her son. Natalie asks her if she wants to hold him. His heart rate declines. She pleads with them to help him. Will reminds her that she and her husband signed a DNR. She tells them she changed her mind. Natalie jumps in to resuscitate him.

April visits Deb. She tells her she had to call Child Services. Deb is upset.

The mother and the father visit with their premature son. Will and Natalie watch with broken hearts.

Dr. Jaffrey snaps at Ava. He insults the tools she is using. Rhodes declares that they are putting them under. Jaffrey objects, but they do it anyways.

Sarah tries again with Hector. This time she doesn’t flinch. He finally stops barking and tells her he feels like he is going to throw up.

Child Services shows up to meet Deb. She is gone.

The baby, Ian, flat lines after he stops breathing. The parents cry. Natalie contains her own emotions and tells them she is sorry.

Rhodes comforts Ava after she meets with Dr. Jaffrey and he tells her he is disappointed in her.

Natalie is approached by the parents who lost their baby. They thank her.

Ethan goes with April to see Deb. She is with other runaways living in a tent. He gives her meds and tells her he isn’t going to tell on her. He just wants to check up on her.