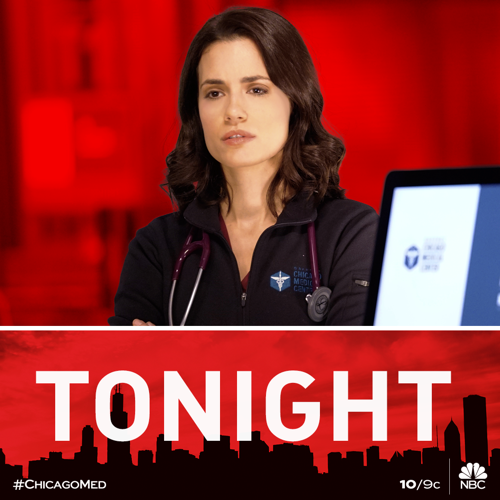 Tonight on NBC their medical drama Chicago Med airs with an all-new Tuesday, March 27, 2018, episode and we have your Chicago Med recap below. On tonight’s Chicago Med season 3 episode 13 as per the NBC synopsis, “When a mother makes a decision regarding care of her vegetative adult son, Dr. Halstead and Dr. Manning find themselves at odds. Dr. Rhodes goes behind Dr. Bekker’s back to figure out a way to get his patient at the top of the transplant list. Dr. Choi is at a loss when a woman in the waiting room falls asleep and won’t wake up.”

Choi asks April what kind of family party she is bringing him to. It’s just a niece’s birthday. He wants to be prepared.

Connor is stressed out. His patient Dan is back. He has tried everything to get his heart issues under control.

Dan comes to see Sarah in the cafeteria. He sits with her. She is looking over legal paperwork. She is cosigning for a home for her dad. Dan thinks helping the family financially can be messy.

Choi is rushed to the waiting room. There is an unconscious female. He rushes her into a room. Choi thinks she may be on drugs but her heart rate tells them otherwise. They order a round of tests while the nurses look through her purse for clues.

A 23-year old male in a motorcycle accident is brought in. Meanwhile, Choi and Sarah go over the tests on their mystery patient Rachel. She is clear of any drugs.

Natalie comes in to start her shift and is immediately put on a case. A twenty-something male with breathing issues who is in pain has been brought in by his mother.

Connor watches as the parents of the motorcycle victim say goodbye to their son. He died quickly.

An alarm in Dan’s room goes off. Connor rushes in. They paddle him and bring him back. His wife watches in horror while she holds their daughter.

April and a first-year resident meet with an older lady who is complaining of back pain. She thinks she pulled something. Suddenly, she vomits.

Dan meets with Sarah’s father who is on the donor transplant list. Meanwhile, Natalie meets with the family of her patient. She lets them know he has pneumonia. She changes his trach tube. Something doesn’t look right.

Connor tells Dan’s wife that they need to put him on support to ease the work of his heart. Meanwhile, Choi meets with Rachel’s husband. He tells Choi about how his wife was in a car accident and since then she has had issues with pain pills.

Becker comes to see Connor and starts yelling. He stole her patient’s heart.

April and the first year realize that his 55-year old patient is actually pregnant. She didn’t just pull a muscle.

Natalie talks with the mother of her patient. She assures her she knows that she is doing her best but she might need more help. Her other children are there. Their mother tells them that their brother wants to die. She tried to help him but couldn’t go through with it.

Sarah tracks down Dan. She is angry. She knows that he threatened her father. Dan did nothing of the sort. He cannot disclose anything else. Dan is keeping quiet about the fact that her father has a personality disorder.

April and the doc deliver the baby. The couple is thrilled after being surprised.

Will tells Natalie she has to call the police about the woman who didn’t clean her son’s trachea tube.

Sharon tells Conrad that his patient isn’t a match given his high antibody levels.

Choi is still dumbfounded by Rachel’s case. Choi looks at her brain scan again. She might have a clot. Meanwhile, Will brings the police to Natalie’s patient’s room. Inside, the family has unhooked him. Will gets angry and tries to revive him while the mother begs him to let her son go.

Conrad resubmits his lab results for his patient Dan proving he is a good match for the heart.

Rachel comes to. She knows what day it is. She is going to be fine. Choi heads to see April at her family party and brings his sister.