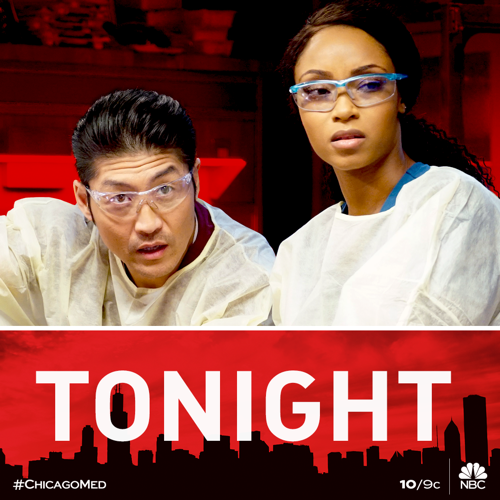 Tonight on NBC their medical drama Chicago Med airs with an all-new Tuesday, April 3, 2018, episode and we have your Chicago Med recap below. On tonight’s Chicago Med season 3 episode 14 as per the NBC synopsis, “After a baby is abducted from Med, Goodwin enlists the help of Dr. Charles and Dr. Reese to find the suspect. Due to the lockdown, Dr. Rhodes must figure out a way to get into the operating room to help perform open heart surgery.”

Dr. Halston is examining a baby that has a pneumonia. Sarah goes into Dr. Charles’ office and tells him that she has seen her father’s chart and he is a psychopath. He asks her if she co-signed her father’s loan before she looked and she says no, he then tells her that maybe she already knew what he was. Sarah is upset, she feels that Dr. Charles should have told her. He tells her that he hopes her finding out gives her clarity because his leaving had absolutely nothing to do with her. Sarah can’t believe that that is her consolation; after years of her father not being in her life now he can never love her.

Dr. Halston gets a call about baby Zack who had a pneumonia, he never made it to PICU, someone posing as nurse may have kidnapped the baby. Sharon puts the hospital on lock down. A 25-year old girl comes into emergency, she was in an accident; her mother is distraught. She has multiple chest fractures and blood all over her face. Another patient comes in, this one is for Dr. Choi and he is 30 years old, his injuries are from being in a bar fight – he says he was stabbed.

Dr. Rhodes is at an event, he sees his dad who is talking to Ava. Dr. Halston and Dr. Manning go into see a Mr. Taylor who is being treated for lymphoma. His wife says he has had multiple rounds of chemo and he tells them he woke up and could hardly breath – the run some tests. On the way out the room, Will tells Nat that he can’t stand this and they have to talk, she tells him she knows and to stop by her place later in the night. The security cameras show that nobody left the hospital with a baby. Dr. Charles thinks the person who took the baby may be a patient in the hospital because they knew where the PICU was, Sarah is worried the person may hurt the baby. Dr. Charles tells Sharon to compile a list of women who have experienced birth trauma in the hospital within the last six months.

Dr. Halston and Dr. Manning find out that Mr. Taylor has a large mass in his chest that is causing breathing problems and they have reached the limits of what they can do. Dr. Sexton tells his 25-year old patient that she is going to be ok.

Mr. Taylor receives his news and his wife is devastated and tells his wife to call the kids. Dr, Halston tells them about the lockdown and even though they want to go home, they will have to wait. Dr. Choi’s trying to save the 30-year old, but he needs desperate help from Connor. Dr. Manning found something, there may be something to help Mr. Taylor but Dr. Halston turns it down and calls it bad medicine. Dr. Manning goes in to see Mr. Taylor, she tells him about the experimental treatment and he gives her authorization to try it on him.

Connor is at the hospital and asks Earl to let him in, he leads Connor to a tunnel to help him in. Dr. Halston finds out that Dr. Manning went behind his back, he is furious and hopes she didn’t put a nail in Mr. Taylor’s coffin. Baby Zack’s IV and bracelet are found in the stairwell, Sarah thinks the kidnapper is playing a game with them.

Dr. Choi is still trying his best and Ava is helping over phone. Mr. Taylor is going into cardiac arrest, Dr, Halston and Dr. Manning try to save him, but he is gone. Dr. Halston calls the time of death and Dr.Manning says she is sorry.

Connor finally gets into the hospital. The patient Dr. Sexton was working with has worsened, there are no doctors available so Doris and Maggie try to save her, Connor is finally with Dr. Choi and managed to stop the bleeding giving enough time to get the patient in the OR.

Sharon approaches Dr. Halston and says that Dr. Ray told her that off label meds were given to Mr. Taylor. Dr. Halston takes responsibility for giving Mr. Taylor the meds, Sharon tells him that she is referring the matter to the disciplinary committee.

Dr. Sexton’s patient may have had a stroke, they rush her to the OR. Nat tells off Will, she is furious that he took responsibility for what she did. Sharon announces they have the woman who abducted Zack, it doesn’t take them long to find her in the old maternity wing. Dr. Charles tells her that they need to take the baby back to his room to treat him or he may die. Sarah tries to calm her and tells her that nobody is going to punish her, they just need to get the baby help as soon as possible. The woman gives Sarah the baby, the authorities grab her and she calls Sarah a liar.

Sharon is thrilled the baby was found and the lockdown is lifted. Sharon speaks to Maggie about what she did and tells her she hopes she doesn’t lose her job over it and unfortunately she has to suspend her for her actions. Maggie says the patient would have died and she has no regrets. Dr. Choi’s patient is going to make it. Dr. Ray goes to see Dr. Halston and Dr. Manning is there, he tells him he was wrong, Mr. Taylor died from a heart attack not an adverse reaction to the drugs and in fact, the tumor had shrunk a bit so the drugs worked. Nat runs out and Will follows her, she tells him that she needs a break from them because he is protecting her too much at the hospital and she can’t deal with it.