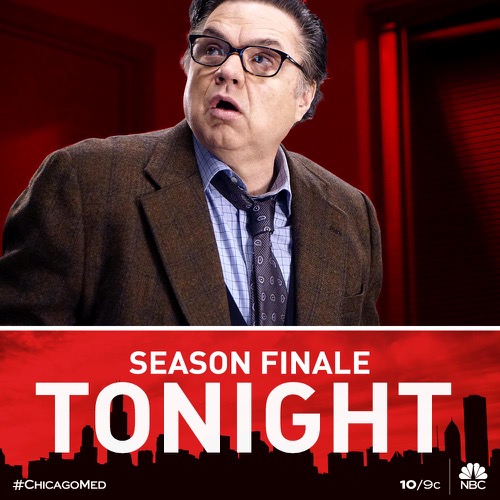 Tonight on NBC their medical drama Chicago Med airs with an all-new Tuesday, May 15, 2018, episode and we have your Chicago Med recap below. On tonight’s Chicago Med season 3 episode 20 called, “The Tipping Point,” as per the NBC synopsis,“ Dr. Rhodes second-guesses his decision to remove himself from the team of doctors who work to separate conjoined twins. Dr. Choi and April make a startling discovery about his sister, Emily, and Dr. Charles uncovers troubling information concerning Dr. Reese’s father.”

Sharon is making an announcement regarding conjoint twins, Dot and Lilly Cronin who spent the night in their pediatric intensive care unit and if they remain stable, they will attempt to separate them.

In the hospital room, Dr. Bekker tells the Cronin parents that Dr. Rhodes will not be assisting in the operation; they are surprised, Dr. Rhodes has been involved from the beginning.

Dr. Halstead has an incoming, an older man with carbon monoxide poisoning; he tells Maggie to call the ICU, the patient is her ex-husband.

The twins are in surgery, Dr. Rhodes is in there and gives advice; Sharon makes a comment about her not understanding why he is not in there.

Meanwhile, Dr. Halstead’s patient is not doing well, he tries to give him the benefit of the doubt and tells Sharon it may be an accident, she says that his girlfriend recently died and he tried to kill himself.

Maggie tells Dr. Choi that the homeless girl he treated a few months ago is back, this time she brought a friend and is asking for him. Dr. Choi calls Natalie to assist him. They go to examine one of the girls and both start vomiting, Dr. Choi orders both of the girls, Kiki and Deb, are to be checked. Both girls have hepatitis A, this needs to be reported.

Dr. Halstead is with his patient, he is awake and alert; he asks him why he didn’t just let him die. Sharon goes in and tells him he is selfish and pathetic. Meanwhile, Sharon is summoned by the board but refuses to go to see them.

Dr, Choi and April head out into the streets where Kiki and Deb live, they want to know who else is sick. They find a woman named Laura, she is seriously sick. they continue to search around and Dr. Choi finds his sister Emily and she is also infected.

Jay is in an emergency with a gunshot victim and asks Will if he gave the ring to Nathalie and he says no, it has to be a perfect time.

Dr. Charles gets a call, from Olvia’s parents, she disappeared a long time ago; they invite him to visit them and they will tell him more about her.

The twins are in surgery. There is a problem, one of the girls has a hole in her heart; Dr. Rhodes goes in and gives advice, Dr. Latham agrees; Dr. Rhodes scrubs in and Dr. Bekker reminds him that if this goes wrong, his career is over.

Dr. Charles goes in to see Bert to see how he is doing since his carbon monoxide poisoning. Bert tells him to leave him alone. Dr. Charles tells him a story that reminded him of when they went on the grapefruit diet. Bert tells him he is wasting his time, to just leave.

Dr, Charles goes to see Sharon and begs her to speak to Bert.

Nathalie has the results for Laura, she has not only hepatitis A but C as well; it has damaged her kidneys and her liver. Laura’s baby’s adoptive parents bring her baby to see her, her name is Anna and she tested negative. All of a sudden, Laura stops breathing, Nathalie tries to save her, but she is gone.

The twins are still in surgery, Dr. Rhodes successfully patches the whole.

Dr. Choi is with his sister, he tells she is doing well. She apologizes to him for lying.

Dr. Charles bumps into Sarah and her father who she is taking for a walk. Sarah goes back to work, Dr. Charles continues to walk with Sarah’s dad. Bob tries to tell Dr. Charles that his antisocial personality disorder is affected by his transplant, Dr. Charles tells him it can’t be, it was a heart transplant, not his brain.

Dr. Charles goes to see Olivia’s parents and they tell him all about her, she loved monkeys and he notices that one is missing on her dresser; they say when they picked her things up from the dorm it was missing.

Sharon goes to see Bert, she tells him that his girlfriend asks her to watch over him when she was gone. Bert apologizes to Sharon, she tells him it was hard the way he left her, but what is done is done and she is working it out. She reminds him that they raised three wonderful children and tells him not to dare do this to them.

Dr. Charles goes to Bob’s apartments and tries to go in but is turned away. He goes around the building and peeks in the window, on the shelf, is Olivia’s third monkey.

Sharon finds out that there is a new Chief of Trauma as well as a Coo and she was not consulted, apparently her refusing to meet with the board earlier in the day is when she would have found out.

The twins are successfully separated. Ava asks Will to go out and celebrate, he says no, Nathalie sees the whole thing and gets very upset and walks away. Will runs after Nathalie and tells him he wanted it to be so special, he is not letting her go, he pulls out the ring, gets down on one knee and asks her to marry him.

Ava figures out that Dr. Rhodes got an offer, he admits and says he is taking it.