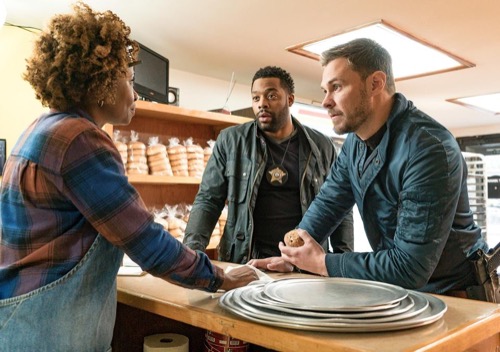 Tonight on NBC their drama Chicago PD returns with an all-new Wednesday, January 31, 2018, season 5 episode 13 called, “Chasing Monsters,” and we have your Chicago PD recap below. On tonight’s Chicago PD episode as per the NBC synopsis, “When an El Salvadoran gang infiltrates Chicago, Intelligence works with a visiting detective to put an end to the crew’s brutal tactics; and Antonio finds himself getting close to the detective only to learn she has a hidden motive for being in Chicago. Meanwhile, Voight learns that the body of his son’s killer has been found.”

Chicago PD begins tonight with Sgt. Hank Voight (Jason Beghe) standing on a bridge, overlooking a crime scene where the police are busy dealing with a crime scene when Dt. Alvin Olinsky (Elias Koteas) arrives to meet Voight, who says “It’s what we thought” and suggests they wait it out and get in touch with Erin Lindey (Sophia Bush) to give her a heads up, as to what is going on. Olinsky tries to reassure Hank that things will be okay; as Voight tells him, he did what he had to do.

Dt. Antonio Dawson (Jon Seda) and Kim Burgess (Marina Squerciati) arrive at a pawn shop, where Antonio knows the owner. The shop had been broken into and trashed a few nights prior, he handed the surveillance tapes over to the district but the previous night some punk rode up on a bike threatened him that bad things would happen, unless he paid his boss protection. Antonio promises to take care of it and orders Marco, the owner to leave his own gun at home.

Kim makes some calls and informs Antonio that the 26ers and the Kings are the big dogs in the district, but extortion isn’t their thing.; Antonio says Marco has been in the area for 30+ years and no one has messed with him. Suddenly, they get a call on the radio and there have been shots fired at Marco’s shop; Kim and Antonio take the call. Antonio is devastated to find Marco on the ground dead and in blood written on the wall is MATAR (Kill) ATERRORIZAR (Terrify) CONTROLAR (Control) – the motto from the Salvadoran gang.

Voight comes to the shop and Burgess gives him what they know, there was a witness where there were 2 Hispanic offenders but didn’t get a good look at their faces. Dt. Marcella Gomez (Sofia Lama) National Police from El Salvador, she is there to observe how the CPD does business. Since Antonio was running with the extortion angle of the case, they are allowed to hold onto the case and Dr. Gomez offers her services since she has worked several of their cases; Voight welcomes her aboard.

Hailey Upton (Tracy Spiridakos) and Jay Halstead (Jesse Lee Soffer) meet with another one of the men begin extorted by the gang. He says he has to do what is best for his family; the one who collects from him are just kids but when he was late once, it was men who came and one was the boss; he had tattoos all over his face – the letters SS, and a fist with two fingers extended.

Adam Rusek (Patrick John Flueger) and Kevin Atwater (LaRoyce Hawkins) went to Franny’s Place and she told them the gang knew better than to to into her place. They broke a window a few weeks back and set off the alarm but that was it. Kevin warned her they will be back demanding protection money, and when she realized they were the ones who killed Marco, she offered he help any way she could.

At the precinct, Antonio and Kim watch the footage with Dt. Gomez of Marco being graphically slashed and stabbed by the gang members. Voight asks Antonio if they got anything thing from the video, he says no faces but managed to get some unique tattoos on their foreheads and hands. As Marcella Gomez explains how the El Salvador gang system works Denny Woods (Mykelti Williamson) shows up and asks to speak to Hank Voight in private.

Wood reveals that a supermarket was breaking ground on the old railroad property by a bridge but it was halted when builders found some human remains; they just identified the remains as Kevin Bingham, the man who murdered his son, Justin. Woods says the crime lab is working overtime to clear Voight’s name in any wrongdoing; he has also brought in the FBI and all hands on deck after everything Hank has been through.

Kim Burgess informs the team that they found a match to the men with those tattoos, Yovani Velazquez (Randy Gonzalez) and Alonzo Amaya (Gustavo Gomez), they are part of a violent SS11 clique run by Raul Martinez, El Lobo.

Marcella Gomez notices that Antonio doesn’t have a ring on his finger and he reveals he is divorced. He learns that she is no longer married either but that is because her son died in a traffic accident. Hailey finds out from Jay that he is actually liking therapy because he is able to deal with the thing that happened in Afghanistan.

A young man walks into Franny’s bakery, while Adam and Kevin work in the back.. He tells her if she wants to keep it a nice business then she will have to pay, explaining the man down the block didn’t want to pay either and it is dangerous for an old lady like her. Franny pulls a bat out at him but Kevin stands at her side while she threatens to split his skull open like a coconut. Outside, Kim and the IU follow as they exchange the note from person to person. Marcella is the one who doesn’t respond, so Kim follows the right girl and then lies about it.

At the precinct, Kim Burgess talks to Sgt. Trudy Platt (Amy Morton) who has an envelope for the “pretty lady from El Salvador”. Kim is confused that it’s from gangs and not homicide. She takes it upstairs and decides to look through the package. Kim calls Antonio, who ignores the call because he is on a date with Marcella.

Antonio wakes up to Marcella already dressed and off to work; she tells him that his partner has been calling him non-stop.

Outside the precinct, Olinsky tells Voight he spoke to Lindsey and he promises that he has Voight’s back and he will let him know what’s come from a mile away. Antonio meets Kim in the stairwell, who tells him a call back would have been nice. She reveals that she is concerned that Marcella is playing them, but isn’t sure why. Marcella has been talking to O’Brien from gangs, she shows him the package, and he makes excuses. She then tells him about how she watched her follow the girl through the gate that matched the description they were looking for and then lied to their faces; it seems Antonio still doesn’t believe Kim.

Antonio asks Marcella about talking to a guy in their gang unit and she is honest about it. She said she met him when she was working through homicide and apologizes saying she should have run it through them. Kim, on the other hand, meets with Keith O’Brien feeling she isn’t getting the whole story. Keith tells a totally different story saying Marcella called him 2 months ago about El Lobo, not just the day before.

Hailey and Jay call to give Kevin and Adam a heads up at Franny’s shop, coming through the rear door of the bakery. Kevin immediately kills one of them with the machete and Antonio is able to arrest the other one, while Adam assures Kevin it was a good shoot.

Once at the precinct, Voight wants to know who beat up the perp. Antonio swears he came into the bakery like that. Marcella says Alonzo is very young to be an enforcer and very scared; she believes Marco could be his first kill and after that, there is an initiation ceremony, where the gang beats him up for 11 seconds. Voight and Antonio go into the interrogation room, to question him, telling him that Marco was his friend and someone is going to have to pay for Marco’s death.

Voight tells Alonzo that no matter how much he wants, he can’t take murder back. Antonio says he is only 16, and he has his whole life ahead of him and what he decides right now, determines whether he walks free by his 25th birthday. He reveals where El Lobo lives, there is a grocery across the street and it’s near a firehouse. Kim and Marcella listen from behind the mirror and Kim confront her, saying she lied about losing the kid she was following yesterday, and she saw Marcella see her walk into the building. Kim wants to know why she knew El Lobo was going to be in Chicago 2 months ago and why she lied about it? Marcella rushes out of the precinct and gets into the car and takes off with a guy covered in tattoos; Burgess takes a picture.

When Antonio comes into the Squad room, Kim reveals everything they know about Marcella Gomez. Antonio is in total shock but they don’t have time to deal with that as the IU is set to hit the house; but when they get there, the front door has already been broken in. Several people have been gun down, but a mother and two young children are safe. Marcella and Flores got there first, Flores got shot and is bleeding pretty bad from the stomach, they took El Lobo in the trunk.

They return to the squad and search several houses and find one address that is vacant, Antonio asks Marcella to put the gun down. Antonio says it isn’t worth it. Voight asks her to give him the gun but she says her life has been over since he killed her sin. She shoots El Lobo in the head and raises her gun at Antonio, who takes the shot and kills her.

Kim checks on Antonio at the station, he apologizes, saying he was distracted and she is a good partner who was just looking out for him. Voight says she was on a mission and there was nothing he could have said that could have stopped her. The only thing that kept her going was that hate; he reminds Antonio that he did what he had to do. Antonio looks at her picture and throws it in the garbage saying he did what she wanted him to do.

Voight sits at the bar where Woods finds him and orders him a drink. Denny tells him they found a slug with Bingham’s body, but it turns out the slug matches the one that was shot at police during a robbery a few years back and it turns out, Voight was the one who made the arrest, but the gun was never recovered. Woods, says they are getting closer and the way he sees it; it’s only a matter of time. He tells Hank to look at the score…. It looks like this game is just about over!