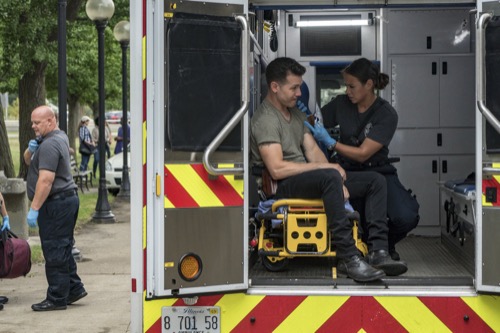 Tonight on NBC their drama Chicago PD returns with an all-new Wednesday, September 25, 2018, season 6 episode 2 called, “Endings,” and we have your Chicago PD recap below. On tonight’s Chicago PD season 6 episode 2 as per the NBC synopsis, “Conclusion. After discovering the true cause of the high rise fire, Intelligence races to find the man responsible. And for Halstead, it’s personal.”

Jane Doe vanished from the hospital, she walked out alone. Burgess finds a GPS tracking device and guesses that Jane Doe cut it of herself, someone was obviously tracking her. Dr. Choi tells Burgess that she has life-threatening injuries and is not going to get far by herself.

Voight tells Halstead that he just heard about his father and he is sorry. Voight tells him to take some time and be with his family, Halstead says it is not what he thinks, he had a complicated relationship with his dad, they really didn’t see eye to eye.

Burgess and Halstead go out to look for Jane Doe and it doesn’t take them long to find her, she is not in good shape. She says she knows who set the fire, he was trying to kill her and she will be free now.

Dr. Choi gives the news that Jane Doe didn’t make it. Voight wants every piece of paper from the crime scene, he needs to know what happened in that apartment so they can solve the case.

Halstead and Upton head to the morgue and want to get info but they are burned too badly. Two of the victims have knife wounds. John Doe 2 had three bullet holes and a severed finger. Meanwhile, Burgess is at the apartment debriefing the residents. Dawson got the details on Jane Doe’s GPS chip, he knows every place she had been the last two months outside of Chicago and he was able to find a match for John Doe 2, his name is Torres and he is part of the Cartel.

DEA shows up, Voight and Dawson go downstairs to deal with it, they want Torres’ body and the case to be kept quiet because nobody knows Torres was hit. Voight says that he will tell the press that the fire was an accident and he wants everything on Torres.

The team starts to look into Torres, people that were loyal to him and they come up with Carlos Mendoza who DEA thought was Torres’ driver. Mendoza lives in Chicago and is still believed to be working with the cartel. Traffic cam caught Mendoza caught outside the building that went on fire. Voight and the team head to Mendoza’s house to arrest him. They get into his house and Halstead, who wasn’t supposed to go inside, apprehends Mendoza.

At the station, Voight is questioning Mendoza and he says he is not going talk. Voight tells him that five other people were killed in that fire and that means, he is never leaving. Furthermore, one of those victims was a cop’s father. Upton wants Halstead to sit this one, but he tells her that she doesn’t know anything about his relationship with his father and he is fine.

Voight comes out and tells the team Mendoza is not talking and they need leverage. He tells them to go back to basics, there had to be planning, someone got in that building, murdered those people and set that fire.

Mendoza’s oldest son, Daniel, is caught on camera, he was on a rooftop that connects to the building that went on a fire a few times the week before. They have intel on Daniel, he is part of the cartel as well as his dad.

Voight goes back to Mendoza and tells him that he knows he got his son to kill for him. He shows him photos of his son on the roof. Mendoza still refuses to talk.

Halstead leads the team into the house where they think Daniel lives. The apartment was rigged with cameras, but Daniel is not there. Severide is there and he tells Halstead that he will do anything that he can to help; he dragged bodies out of that building, Kidd got injured, he wants to see Torres go down.

Voight and Halstead go back in to see Mendoza, he says he wants a lawyer. Halstead says that he is going to tell him the truth, they have nothing on him, but if they let him go they will give his name to his people and he is a dead man. Halstead starts to graphically describe how the cartel will kill Mendoza and his son. Mendoza says that he dug his grave a long time ago, he is just trying to give his kids a good life. Daniel chose this, there is nothing he can do and nobody can protect them; he will not help them kill his son.

Mendoza has another son, Juan, and he is not in the cartel. Halstead wants to go after him but Upton and Ruzek don’t want to because he is innocent. Voight says he is all they have, bring him in.

Ruzek and Upton go to see Juan and tell him that they want to bring him in to ask him questions. Juan says no, Halstead is there and he starts to get rough with Juan, Upton tells him to back off.

Voight has Juan in the station and cross-examines him with Dawson. Halstead goes in to see Mendoza and tells him he can leave, they don’t have anything to charge him with. As Mendoza comes out he sees Juan and Halstead says they are taking him to county. Mendoza is freaking out and begs them to let Juan go. Mendoza goes on to say that he told Daniel that Torres was in town. Halstead tells Mendoza that he better give up Daniel, or they are going after Juan.

Voight takes Halstead off the case, he thinks he is too close to the case, Upton takes his keys from him.

Mendoza is with Dawson and calls Daniel, a tracking device is attached to his phone so the team can locate Daniel. Halstead makes a phone call and tells some that they said he should call when he needs help and now is the time.

The person Halstead called was Severide. The two listen to the radio and overhear where Daniel could be, they drive there. Halstead gets out of the car and all of a sudden he sees a man running, he heads after him on foot. The runner is Daniel, he shoots at Halstead and Halstead shoots at him. The two are shot and hit the ground, Daniel begs Halstead to save him. Upton and Rizek show up and call for an ambulance.

Halstead is going to be ok, one bullet hit him but the other didn’t go through because he had a vest on. Voight shouts at him for denying a direct order and tells him to always do his job and listen. Upton tells Halstead that Daniel is dead.

Halstead is with his brother at his father’s place. They go through some of his things and Halstead breaks down.