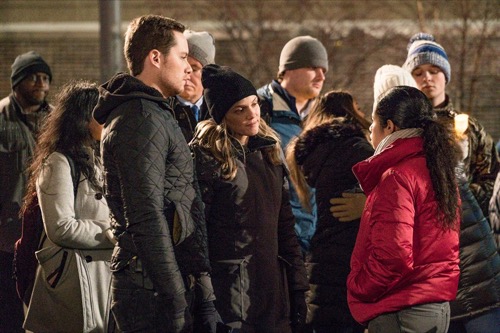 Tonight on NBC their drama Chicago PD returns with an all-new Wednesday, February 7, 2018, season 5 episode 14 called, “Anthem,” and we have your Chicago PD recap below. On tonight’s Chicago PD episode as per the NBC synopsis, “When a basketball star is found murdered after an anti-police rally, Intelligence navigates a politically charged environment to track down the killer. To complicate matters further, Woods’ daughter Brianna is tangled up in the case.”

A peaceful demonstration descended into a brawl on tonight’s all-new episode of “Chicago P.D” however it what the police found afterward that turned the whole matter into a crime scene.

The demonstration had been about police brutality. The people that were there were advocating against those police officers that abused their power and chose to shoot to kill as their first response in situations often involving black men as well women. However, another group arrived not long into the demonstration and they came looking for trouble. The group that was mostly Neo-Nazis members had believed that the demonstration was disrespectful and that the many ethnic groups that were present were the real problems. So they came with anger in their heart and more than a few arrived with weapons to forcefully break up the demonstration.

All they did, however, was cause a riot. There was chaos everywhere and no one knew where to run or where to hide until finally, the police arrived. They restored peace at the demonstration and were checking the nearby scene when they found the body of Chris Taylor. Taylor was a young basketball player that had gotten to college on a basketball scholarship and had been doing well for himself until he started protesting the anthem. That’s when the fans, boosters, and even his own school turned against him because they didn’t like how he protested injustice so the one thing that the police knew they had to do was close this case quickly.

The fact the victim had been so well-known meant it was going to be publicized and that news would get around that it was probably one of the neo-Nazis that did it. So Voight was told to hurry up and close this case before a race war began out on the streets through the person that was behind the demonstration that day happened and happened to know the victim very well just happened to be a cop’s kid. The kid, if the young woman could be called that, was Brianna Woods and she was a daughter of a friend of Vought. Therefore, Voight didn’t know how to broach such a delicate subject with his friend’s daughter and he knew that she had information she wasn’t telling him about.

Brianna had believed like everyone else that the person that shot Taylor was a white, but there had been a witness that day that claimed the shooter had been black and that reaffirmed when the shooter later tried to kill Brianna. Brianna had been walking home when a van drove by and started shooting. She was thankfully ok afterwards and the police were able to trace the vehicle back to a known gangbanger so they kept stumbling over why did these people go after Brianna. Brianna was supposedly a good kid from a good neighborhood and so, while they could understand why Taylor might have gotten into some trouble, they couldn’t understand why would Brianna?

Voight had asked Brianna to come back in and he was trying to get her to open up to him when her father stormed in. Her dad said she wasn’t allowed to run from the police or talk to them without her lawyer present and the fact no one had bothered to call him was just one more thing to hold against Voight. Voight had tried to reason with him by telling him that he had to talk to Brianna because she was mixed up with someone named Kendrick Gaines and so he reasoned that it was better Brianna talk to them before she could get hurt. And so her father agreed to let her talk.

The one condition he had was that she talk to him. He then went back into the interview and demanded that Brianna be honest with him because he suspected the mess she was in involved her boyfriend Jamal. Jamal had been another young basketball player protesting and it turns out he had been involved. He and Taylor had gotten approached by Gaines that agreed to pay them if threw a couple of games for him and so being strapped for a case they agreed. They threw a couple of games and were doing fine until they got benched. Their coach had decided to bench them for protesting and had replaced two seasoned players with freshmen.

The two naturally still thought they would have been fine because they were the stars of the team and so they would never have suspected that the freshmen that had replaced them would go on to score thirty-six points in one game. It was practically a miracle and caught everyone by surprise including Gaines who lost a lot of money he had riding on that game. So Gaines killed Taylor and he had tried to kill Brianna because he blamed her the loss as well. She had been the one to write the story about the guys and that’s what drew national attention to them. And so the next thing the police did was bring in Jamal.

Jamal hadn’t expected anyone would get hurt and so the police were able to use his conscience to push him into wearing a wire. He just needed to meet with Gaines and get Gaines to confess to Taylor’s murder then he would be in the clear. But Brianna’s dad knew Jamal was never going to play ball again and he also told Voight that Jamal didn’t deserve a deal. He said Jamal was a bad influence and so he wanted Jamal out of Brianna’s life. So Brianna hadn’t known that the deal wasn’t going to pan out until her father told her that it was time to move on and that Jamal might still get jail time.

That’s when she rushed to Jamal’s side and interrupted him when he was talking to Gaines. Gaines naturally wanted to know why Brianna was there and when the police tried to move her to safety – Gaines ended up taking her along with a bar full of people hostage. He figured out Jamal had betrayed him and so he was going to use Brianna to get a getaway car though she continued to be a problem. She was told to just do as Gaines said and not run except she saw an opportunity and tried to run anyways. So Brianna was shot trying to flee and, while they later got Gaines, that didn’t change the fact that Brianna was dying on tonight’s episode because she thought what she had with Jamal was love.