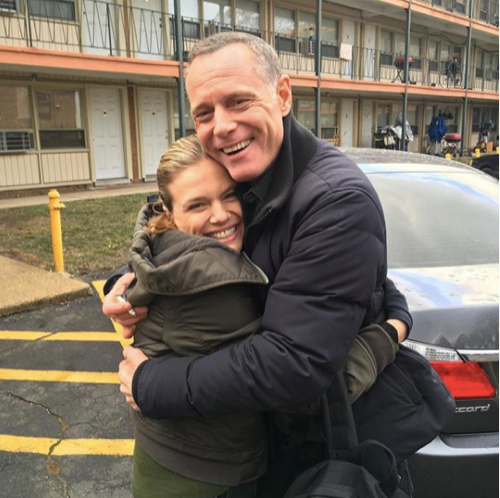 Tonight on NBC their drama Chicago PD returns with an all-new Wednesday, March 14, 2018, season 5 episode 17 called, “Breaking Point,” and we have your Chicago PD recap below. On tonight’s Chicago PD episode as per the NBC synopsis, “When a prominent Alderman known for his urban revitalization efforts is killed, Intelligence looks into the corruption haunting his neighborhood. Meanwhile Olinsky (Elias Koteas) feels pressure after receiving an ultimatum from Woods (guest star Mykelti Williamson).”

Voight and the team are on the scene of a man who is dead, his name is Burton and was close friends with the mayor who wants this case solved quickly.

Meanwhile, detective Olinsky is called down to headquarters for questioning and Voight is surprised, he knows nothing about it. Bingham murdered Hang Voight’s son and his body was found six weeks ago and third party DNA found on his body belonged to Olinsky.

Voight tells the team to not give up on the robbery idea. The cause of death was a single gun shot to the head, the entry wound is clean – someone sniped him from far away and it actually looks like the robbery was to throw the PD off the scent.

Ruzek tries to get info on why Olinsky was taken in, but he tells Voight he was shut down. They ran the foreign dna on Burton’s body, it belongs to Darius Brown and he has a prior – they have a current address and are on their way to get him. They find the guy in his closet playing a sax.

Meanwhile, Voight caught up with Olinsky who tells him they found his dna on Bingham’s body, he asked for a lawyer and he is going to charge a hundred grand up front. Olinsky tells Voight he may have to borrow some money from his rainy day fund, Voight says that he put that away for his grandchild. Voight says when they dug up Bingham’s body he figured he could be arrested any minute.

Darius is being questioned, he says robbing Burton would have been disrespectful. When he was walking up to the body there was a blue sedan and he was already dead when he robbed him.

Now the PD have to run all the blue sedans in the city. Just before Burton was murdered someone left him a voicemail saying that he deserved to die. They find out that the message came from a pay phone at a restaurant and a Coleman Lewis was the one that left the message.

Coleman doesn’t say that he didn’t leave the message, he admits to it, he was angry with him but he didn’t kill him. Coleman says that Burton and his son Arthur play dirty and they should look into that instead; apparently Arthur hangs out at a gang bar.

Arthur is found dead, a single shot to the head like his father. Voight thinks this is all about drugs. Voight goes to see Arthur’s mother and asks her if she ever heard of the heroin highway. She tells Voight she and her husband grew up with gangs and she knows how it works.

The LLC her husband and son formed made several payments to someone name Lincoln who doesn’t exist – he asks her if it is gang which one would it be, she says the west side disciples. Voight goes to question Lamar who runs the gang, he says he knows nothing about it. Voight tells him that he thinks he popped Burton and Arthur, Lamar says that he is done talking.

Olinsky is bring questioned again, but he won’t give any info, he is not sending Voight down the river, no matter what. Meanwhile, the PD is still trying to track down the blue sedan and they may have found their car. The find the blue sedan and the guy makes a run for it and tries to escape. In the end the PD are too much for this guy and they block him in and hand cuff him.

In the trunk is an AR15 assault rifle. The rifle was used in both murders, the guy’s name is Kian, but he has no prior cases. Voight tells Kian that his rifle was the one used in both killings and they know he has a partner, he can cut himself a deal, but he needs to give up his partner or he is going to end up doing the time and life in prison is no joke it is forever.

An old friend of Kian’s gives up his cousin’s name, Lamar Jenkins, who she says is in a gang. Kian is let go, Voight tells him that there is not enough to charge him – but the moment he is out of the station, PD is following him.

Kian goes into a mini mart – makes a call and tells the person to advise Lamar to be careful because the police are looking for him. It doesn’t take long to track down Lamar. Olinski finds a bag of cash, Lamar stashing it and looks like there was about twenty thousand. Lamar’s prints were not on the car.

Kian is told that Lamar was arrested for both murders and he told the PD that Kian is the real murderer. No matter what they do. they can’t break Kian. Voight tells Kian that they are going to arrest him and in prison he won’t get narcotics for his anemia. Kian freaks out and tells Voight and Olinsky that he drove the car, but it was all Lamar.