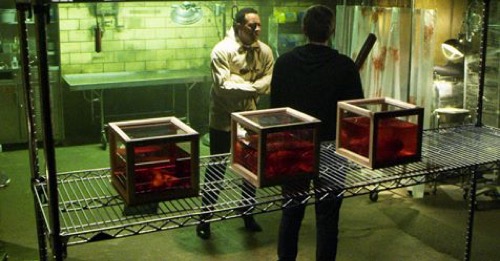 Tonight on CBS their hit drama Criminal Minds returns with an all-new Wednesday, December 12, 2018, season 14  episode 10 Fall Finale, called “Flesh and Blood,” and we have your weekly Criminal Minds recap below. On tonight’s Criminal Minds episode season 14 episode 10 as per the CBS synopsis, “Prentiss faces her past when the BAU is sent to investigate the murders of prominent businessmen, all of whom are missing their hearts. Also, Prentiss plans a romantic first date with Mendoza, but the evening is cut short by an urgent call from Rossi.”

A couple of bodies were found in Rockville. They had been in such a horrible state. The victims were beaten to the point that every bone in their body was broken and then their hearts were ripped out. There weren’t surgically removed but were more or less ripped out of their chests with some instrument or another. The hearts also weren’t found with the bodies. It was believed that the Unsub was keeping them as a souvenir as a possible means in which he could relive the kill itself. He needed to feel like it was he was in control and remembering what he did to his victim was a way to do that.

The team looked at the victims’ personal lives and only one thing stood out. Both of the victims had gone to the same college and from there they went on to live very successful lives. There was one that was married and the other that was single and the differences far outweighed what they had in common however there was a third victim before long and his death helped give the BAU some answers. The third victim was identified as Dennis Kirkwood. He went to the same college as the other victims and he had a past. He had been suspected in the death of a young woman named Robin Rhodes. She had been an intern at Dennis’s office and the two had had an affair.

The affair happened while Kirkwood had been engaged. He went on to marry the same woman and the night Robin went missing he was allegedly having his bachelor party with all of his college friends. They gave him an alibi for that night and Baltimore PD eventually ruled Robin’s death as accidental. It was claimed that she went on jugging and must have hit her head. The police figured she was so disorientated that she ended up falling into the river on her own. It had been a two-year investigation and Kirkwood had been found innocent at the end of it. The only one that didn’t think Robin’s death was accidental was her mother.

Dr. Rhodes accused the police department of covering up her daughter’s death. She claimed that powerful men had lied for Kirkwood and that’s how her daughter’s got swept away. Dr. Rhodes had still felt that way when the team went to go talk to her. They asked her if she knew any man in Robin’s life that matched their profile and she claimed she didn’t know anyone they were describing. So then team wondered if she could have hired someone to punish the men she blamed for her daughter’s death, but then they had looked into their victims’ last whereabouts and believed they were targeting the wrong person.

The victims had all been lured into a trap by women. There were young attractive women that had been hired by a young man who claimed that he wanted to play a prank on his father’s friends. The Unsub could have killed them once he no longer needed them and yet he didn’t. He let the girls go because he didn’t want to hurt them. He just wanted to hurt the men he believed killed Robin. The team went back to Dr. Rhodes to ask her about the Unsub and again she denied knowing him because she tried to claim the killer could be someone that took on her daughter’s cause for no reason. And the team knew that there was always a reason.

Dr. Rhodes was a therapist and the team looked at her client list. Of the men that came to see her, there was one name that stood out. It had been Edward Addison. His adopted parents had changed his name to that because they didn’t want him to grow up with the stigma of being the son of a serial killer. His real name was David Smith and his father began killing people when his ex-wife left him. He would target women, beat them up, and dumped them not long after ripping out their hearts. The father didn’t hide what he did from his son and so that’s how Edward learned his methodology. The team hadn’t put the pieces together because they’ve seen so many bodies dumps over the years.

Only, once they realized what they were dealing with, they knew that Dr. Rhodes had committed a crime. She had manipulated her relationship as Edward’s doctor to get him to kill for her. She as seasoned a therapist must have seen how much Edward suffered from extreme maternal transference and even if she didn’t it was still in his file. He revered women and was so desperately looking for a mother to replace the one that had left him with a monster. He had gotten lucky with his foster parents and then later one he probably thought he should see a therapist make sure if he never became like his father thought he then got stuck with Dr. Rhodes.

The doctor must have told him about her daughter as well as the name the people she figured were responsible. Meaning she set the whole thing in motion. The team tried to arrest Dr. Rhodes and she claimed that she had nothing to do with Edward’s actions. She also told the team she was willing to help them arrest Edward and well, the plan didn’t work out. Edward had seen the trap and he had felt betrayed by Dr. Rhodes, so he bypassed the FBI and went after the doctor. The doctor would have had her own heart ripped out she didn’t confess. She confessed in full view of the FBI that she had supplied the money as well as the names all to get revenge on the men that were supposedly responsible for her daughter’s death.

It seems all Edward wanted, in the end, was for someone to realize he wasn’t like his father and so he gave himself in.

Edward was finally going to receive the care he should have gotten from Dr. Rhodes!