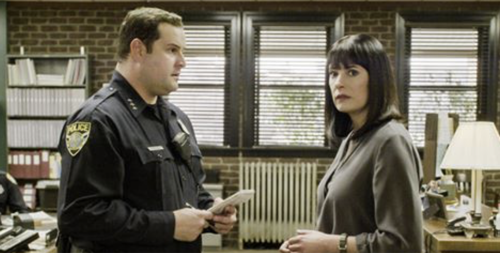 Tonight on CBS their hit drama Criminal Minds returns with an all-new Wednesday, January 10, 2018, episode, called “Full-Tilt Boogie,” and we have your weekly Criminal Minds recap below. On tonight’s Criminal Minds episode season 13 episode 11 as per the CBS synopsis, “The BAU team’s investigation into the home invasion and attempted homicide of a police chief’s wife uncovers a world of secrets in a small town in Virginia.”

The team was called to Hitchens, Virginia after a police chief’s wife was found partially buried alive on tonight’s all-new episode of “Criminal Minds”.

The victim’s name was Trish Gaines. Her family had gone on a camping trip and so she had gone out that night with a few friends for drinks, but she ran into some problems at the bar when a man tried to chat her up and refused to task rejection well. He had actually followed Trish when she went to take a breather outside and she had had to fight him off before rushing back inside. So Trish was extra careful when she went home that night because she decided to have one of her husband’s deputies drive her back to her house and was unfortunately attacked that same night once she had been left alone again.

The deputy, however, was beating himself up when the team flew in. Mack said that Steve had asked him to keep an eye on Trish and that this had to happen on the one night that Steve left his wife alone. So that begged the question why Steve never left his wife alone? The team checked into Steve Gains and he had moved his family to Hitchens after his failed bid at a mayoral seat in a more metropolitan city so they wondered if maybe Steve had been concerned about his wife. She was just getting used to the area and he was a police chief in a rural town that wasn’t exactly flourishing. Half the stores in town were closed down and the only business that seemed to be thriving were the bars.

Only Emily talked to Trish’s friend Barb. Barb said that Steve had called Trish to check up on her more times than her own husband did and she thought her husband was bad. So Emily asked her team to find out what they could on Steve’s relationship with his wife and Garcia believed she may have found evidence of spousal abuse. She found Trish’s old medical records and Trish had been put through everything from broken ribs to several miscarriages. Trish, of course, had explained several of these incidents away by saying she had taken a nasty fall and that she was clumsy yet that’s what she would also say if her husband was abusing her.

The team, therefore, decided to play it safe. They were going to carry out their own investigation on Steve without letting anyone know and it just so happens their plan failed. Steve did find out and vehemently denied abusing his wife. He said that he called her all those times because she hadn’t been at home and he had been concern, but JJ decided to push him on what Trish’s medical records revealed and he still denied ever hurting Trish. Trish he said was clumsy and that he would never hurt her. So Steve decided to stop being cooperative and withhold Trish’s doctors found when they brought her in except the team still found out one thing.

They found out Trish hadn’t been sexually assaulted and so that ruled out Rick Sturges who had harassed her at the bar because he was a registered sex offender that wouldn’t have stopped at physical assault. Just with Rick no longer suspect, the team decided to look much deeper into Steve. Steve was hiding something and so JJ asked his children a few questions. Like if their father had been with them the entire trip and Trevor said that his father had stepped away. He didn’t know when only that Steve had been gone when he woke up and six and back by seven with doughnuts. The same doughnuts that Steve said he had to get because he was on breakfast duty.

Meaning there was an explanation for everything through the fact Steve figured out they were investigating him had made them believe the whole police department could be compromised. Which included Mack. Mack had been the last person to see Trish before she was attacked and he had been part of the response team when her body had been found. So the team looked into him and they found out he had left one woman off his official reports because the hikers that called 911 had said that a mysterious woman had been the first person to notice Trish in that shallow grave, but the team were trying to figure out why Mack would cover that up when he was later found murdered.

Mack, it seems had been running his own investigation because he had felt guilty for not keeping watch on Trish and so he met with a woman he thought would give him answers yet she ended up playing a part in his death. So the team finally had enough. They demanded Steve tell them everything because the whole town appeared to be keeping secrets and so he told them that his wife was an addict. She had gotten addicted to her last miscarriage and Steve was slowly trying to detox her by giving her smaller and smaller doses of his own pain medication. He thought that was the only way to wean her off it completely and so that’s why he kept explaining everything away.

Steve has been hiding the fact his wife has been struggling with the addiction because he thought he could help her on his own and that’s also why he had kept calling her when he left town. But Trish hadn’t broken her word to her husband. She had remained clean with him gone and had even called a helpline to stay in control, however, when she later woke up from her coma, she said that the woman that answered had gotten upset with her husband for giving those pills. Trish said that she had tried to explain that he was helping her and that she only needed help because she had been left home alone. And so the team figured she must have spoken to the Unsub.

The Unsub they figured was a woman and the closest they got to the drug dealer that’s been supplying the whole town was that her name was Shelly. So the team checked the doctor that had prescribed Steve with the painkillers and it turns out Dr Gorman’s wife is Michelle Mackrel aka Shelly. Shelly was the sister to Kat Mackrel who was supposedly a friend of Trish’s and who else went to a juvenile detention center for supposedly beating her father nearly to death, however, the team didn’t believe Kat was responsible for that and for what happened to Trish. They believed she was the woman that had found Trish in the nick of time and figured her sister has been manipulating her for years.

Shelly happened to have custody of Kat’s daughter Justine and so the only one in the little girl’s life that didn’t seem to be a crook was actually Dr. Gorman. Gorman had been checked and he had nothing to do with his wife’s side business. So she’s been stealing drugs from him for years and covering it up, but the team moved to arrest Shelly in time because she had talked her sister into overdosing and so they were able to rescue Kat. Kat was just another one of Shelly’s victims and, despite everything that happened, the team simply hoped that the little girl would be allowed to stay with her uncle.