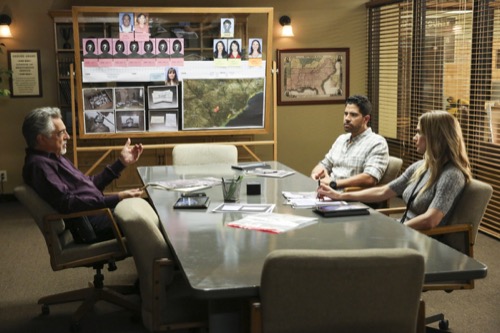 Tonight on CBS their hit drama Criminal Minds returns with an all-new Wednesday, October 10, 2018, season 14  episode 2, called “Starter Home,” and we have your weekly Criminal Minds recap below. On tonight’s Criminal Minds episode season 14 episode 2 as per the CBS synopsis, “The mummified remains of numerous victims are found in the walls of an elderly couple’s home in remote South Carolina. Rossi, J.J. and Simmons are dispatched to track down a trail of clues that date back over 20 years. The hunt becomes urgent after BAU learns the killer has a specific ritual of when to strike, and like clockwork another person goes missing. Also, Rossi reconnects with his ex-wife, Krystall.”

A couple found a mummy in a new home on tonight’s all new episode of “Criminal Minds”. The mummy looked like it had been there for a few years and so it sounded as if it was a cold case. Prentiss hadn’t wanted to send the whole team down to South Carolina for such a case and she asked Rossi for a favor. He had been in Savannah for work and he wasn’t from the small town where the incident occurred. He was asked to go to the house and merely check the scene over. Rossi hadn’t thought it was a big deal and he had been happy to go. He thought he would go and assist the local police on what their next actions should be however he was at the scene when they brought in the dog and he was the only one that didn’t think the dog was confused.

The dog was going around and barking all over the place because it was finding bodies. There had unfortunately been more than one mummy hidden in the building and Rossi used the dog to unearth all of them. They found a total of five bodies and were still counting by time Rossi’s team got a call. Everyone was needed for this case and so the wheels went up. The rest of the team had gone over what they knew on the plane and it wasn’t much. The house once belonged to Karl and Dorothy Elgin. The husband had died some years ago and it wasn’t long before the wife had been found wandering the streets. It was believed that she was suffering from dementia and as she didn’t have any family left she was put into care.

The house then went to the bank and it was sold to the unfortunate couple that thought they could renovate it. It was the renovation that led to discovery. The body that the couple found and that the police later found all seemed to be at least twenty years old. When the team arrived on the scene, the state police were assisting the small town of Varnville with the case. The town didn’t have the means to properly test the bodies and so that’s where the assistance was really come in handy. Both teams were able to work side by side without a problem and so they were willing to work with the BAU (which hasn’t always been the case in these situations). So Prentiss and her people were talking with the medical examiner and was reviewing everything when a discovery was made.

The police had found more mummies and these mummies weren’t more than a year old. The team took this latest discovery to mean that there was a copycat. They were so sure that this wasn’t the original Unsub because they believe the Elgins were responsible for the older bodies. The older bodies were all women in their late teens to early twenties, petite, and brunette. They also had clothes that appeared to be mended and that’s when someone remembered that Dorothy Elgin likes to sow. She probably either played a part in these women’s death or turned a blind eye as her husband went about abusing them. These older victims had all been cared for and there was a marked difference with the younger victims.

The younger victims were all ages that the original victims would have been if they had lived. Not only were these victims older, but they hadn’t been tended to. There was no one to fix their clothes or make them a decent meal and their entombment had been thrown together like someone following a formula. The team went back to Dorothy and they tried to get her answer a couple of their questions. Only she had been too out of it. The nurse eventually took her away and while she was being wheeled out of the room she grabbed a knife and stabbed herself. Dorothy committed suicide because she remembered something and hadn’t wanted to accidentally spill the information because of her illness.

The team figured there was only one reason she did that – she must have been protecting someone. They looked into her and they asked if she had a child. The local police said that there was never a child scene on their land and so Prentiss asked the medical examiner. The doctor said that Dorothy had given birth at one point and the fact no one ever saw this child or knew that it exist meant it would most likely the Unsub. The Unsub had grown up watching his parents kill these girls and he thought it was his duty to pick up where they left off. Especially, once his father died. His father death could signify that he was the new patriarch and that’s why Dorothy wouldn’t talk to the police. The team believed that Dorothy might have also hidden something else and so they searched her room.

The team ended up finding letters from the victims. The victims had all written home to tell their parents that they found this nice couple and that his couple treated them like they were own daughters. It was the daughters theme that stuck out. A woman later came to the station and she told them that she was the Elgin’s daughter. She had been kept on the property and hadn’t been allowed to leave growing up. Leeanne knew that her parents were odd and she would sometimes to sneak off to get away from them. She soon met a boy and got pregnant. Her parents had been angry with her and they made her have the baby on the property in secret. Leeanne knew that her parents shouldn’t be around her baby and so she finally ran away one night. She took the baby to his father and his paternal grandparents agreed to raise him as long as Leeanne played no part.

Leeanne had known that the Milburns were good people and that they would be good for her son, so she left him with them and left town. She thought that her son had grown up with his father and grandparents yet the team had looked into it and the Milburns had been killed a few weeks after Leeanne left. The deaths had been made to look like a murder/suicide and the BAU had seen for themselves that the scene had been staged. That helped them to then put the rest of the pieces. The team informed Leeanne that her parents had murdered the Milburns and had kidnapped their grandson. The little boy was unfortunately raised by two very unhealthy people and it was these same people that kept trying to recreate what they had lost. They would find girls that look like their daughter and was the same age because they thought they could start again.

The only problem was that these girls would then want to return to their real parents. The Elgins couldn’t have that and so they would bury them in the house to ensure their “daughter” could never runaway again. The couple had taught their grandson that he could reclaim his mother by doing as they did and so he went about finding surrogates to keep the family happy. The team were able to track their Unsub when they asked Leeanne where she used to go as a child with her parents and she told them about the cabin they used when they went fishing. It turns out the Unsub went there to bury his latest victim alive and luckily the victim was found in time. Rossi pulled Mary Brewer out of the floorboards and saved her life only it unraveled the Unsub.

The Unsub freaked out when they saved his victim because he said that she belonged there with him and that’s how he’ll always see things.

Rossi knew that there was nothing he could say to get the Unsub to see the truth and so he didn’t try. He just went back on vacation and hung out with his new girlfriend. And that time, no one interrupted his relaxation with a favor.