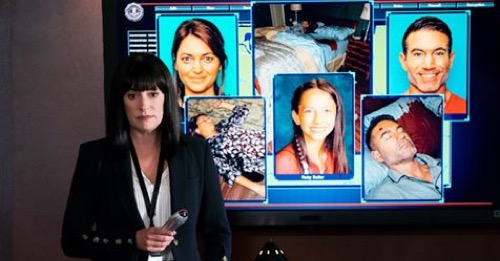 Tonight on CBS their hit drama Criminal Minds returns with an all-new Wednesday, November 21, 2018, season 14  episode 8, called “Ashley,” and we have your weekly Criminal Minds recap below. On tonight’s Criminal Minds episode season 14 episode 8 as per the CBS synopsis, “The BAU investigates a double homicide and kidnapping in New Hampshire. Also, Rossi’s plans to elevate his relationship with Krystall don’t go as planned.”

Plymouth, New Hampshire – A man enters a home in the dead of night and shoots a couple sleeping in their bed. Their daughter hears it and hides under her bed. The door opens and she is pulled out by her feet.

Emily calls Luke in. He can work their next case with Garcia. Meanwhile, Penelope is mad she wasn’t told David bought Kristal a ring. She races into his office and goes off on him. She realizes Kristal is behind the door. She leaves feeling bad. Kristal tells him she doesn’t need a ring. Penelope comes in, they have a case.

The team meets on the new case. An 8-year-old Ruby iButler s missing in NH. Whoever took her was methodical. They need to move now.

On the plane, they talk about who their suspect might be and their profile. They arrive. David and Spencer look at the parents’ bodies. The unsub was vicious in his killing and David thinks he knew what he wanted from the start – Ruby.

Penelope goes through the crime scene. She notices the mother is a big spender. Luke and Penelope confirm that the Butlers were on their third mortgage and in debt. Could that be why Ruby was taken? They all talk and go through the crime from the killer’s point of view.

Penelope and David head to a local bakery where the mom often went. While talking to the owner they turn to see Ruby. She tells Penelope that the unsub told her to say “you’re my mommy now.” She faints. Penelope and David run outside but seen no-one. The unsub appears to be out for bad parents and wants to save kids. Meanwhile, the unsub kills another set of parents and takes their daughter.

Penelope touches base with Tara who thinks their unsub is strung to rehome these kids. Penelope thinks he is watching these families very closely. Tara and the bakery owner sit by Ruby’s bedside. She wakes. They tell her she is safe.

Spencer thinks this might be something to do with genetics. He has looked into the families histories and learns both girls where adopted. The unsub could be adopted and is targeting parents he thinks aren’t doing a job.

Tara talks to Ruby who tells her the man made her wear a dress. She asks if this is her fault. Tara tells her not at all.

Matthew and JJ look over the crime scene at the Shaw’s home. Matthew thinks the unsub attacked while the parents were awake because he knew they were having marital problems and couldn’t wait to take the daughter.

The bakery owner shuts her shop down after news channels arrive. Penelope and David catch the story. This is going to make the unsub devolve. Meanwhile, the unsub takes Naomi the second girl for a ride. She says she is hungry. They stop at a store. The store employee angers the unsub. He kills him.

The team learns about another murder of two parents across state lines. The cases are all connected. They discover the unsub is on the move and he has killed a store owner. They also learn that he had a daughter who was adopted but later died from a heart defect. He blamed the adoptive parents. He used the look books from a local adoption agency to try and find his own daughter Ashley and that is how he learned about the other 8-year-old girls. Meanwhile, the unsub arrives at the home of his ex Becky and tells her he has their daughter. They are going to be a happy family.

Becky tells the unsub Jordan that this isn’t their daughter. They didn’t work and she didn’t tell him about Ashley because he kept getting meaner. He lunges at her and then calms down. He wants them to play cards. Penelope and David arrive. Jordan shoots at them. They make their way in. Garcia hacks the TV and plays a video of Ashley, his daughter.  He sees it and comes to reality. He collapses and cries.

David talks to Kristal about their first wedding in the elevator back at the office. They were married by Elvis. This time David wants to have a real traditional wedding and make it mean something. She says yes after he opens the ring box. They get off the elevator to the team with drinks in hand and ready to celebrate.