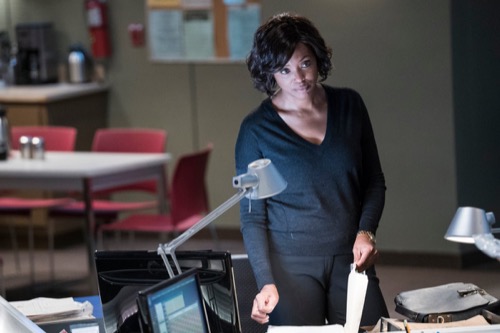 Tonight on CBS their hit drama Criminal Minds returns with an all-new Wednesday, December 5, 2018, season 14  episode 9, called “Broken Wing,” and we have your weekly Criminal Minds recap below. On tonight’s Criminal Minds episode season 14 episode 9 as per the CBS synopsis, “A professor from Lewis’ past tips off the BAU to an alarming number of overdose deaths of patients who just completed rehab.”

Someone reached out to Dr. Tara Lewis about a strange spike in questionable opiate overdoses on tonight’s all-new episode of “Criminal Minds”.

The person that contacted Lewis was her ex-husband. Dr. Daryl White suffered from his own addiction in the past and he would be the first to mention how quickly someone relapses after leaving rehab, but the cases he found were about people that died from a heroin overdose and heroin wasn’t listed as any of the victims’ drug of choice. The victims had all sought treatment for something else. Like cocaine or methamphetamines! They weren’t heroin users and so to relapse with something they weren’t used to nor knew how to control was the reason the cops had ruled these deaths as accidental overdoses. And so it was only Daryl thought different.

Daryl was in recovery and has since remarried however he knew what he was talking about and so Lewis decided to open an investigation. She filled in her team with what she knew and they later flew out to the scene. They thought they could take another look at the seven people that died and as luck would have it they got a fresh one. A woman by the name of Bonnie Sullivan died of an apparent overdose and she was killed by heroin when her drug of choice was meth. It seemed suspicious and so they ran a tox screen. The medical examiner found a sedative in Bonnie’s blood and there weren’t any opiates in her system.

It didn’t make sense until Darryl said he might know why someone wasn’t showing up on the tox screen. He remembered when Lewis had tested him and he passed because he used certain chemicals. The chemicals come from China. There were normal rules about what they could or could sell in the United States and people found ways around that by changing just one little thing in the chemical makeup. It meant it wouldn’t show on normal drug tests and so the medical examiner did the test again. He found on his second-go-around that the drugs that killed Bonnie were a unique mix of everything.

The Unsub was numbing people and then killing them with his own concoction. He was smart enough to know that if he used his own drugs to kill people that no one would know what they were looking for or what he was buying to kill his victims. So it was murder! The Unsub later struck again and with the death of Clay Miller, he was now up to nine deaths. The team made sure they were first on the scene at Clay’s home and they noticed that the Unsub had a mistake with his latest victim. He had been about to kill Clay when Clay fought him and the Unsub had to smother him to death. It was a much more personal way to kill someone and so that one little change could begin to unravel the Unsub.

The Unsub had also taken to drawing on his victims. He left behind a tattoo created in UV pen of wings and so they were trying to figure out the why behind it. They thought that Clay’s rehab might help them shed on who might have had a problem with Clay and that’s when they came across Dr. Robert Smith. Smith owns the rehab facility and he didn’t think they needed to help the BAU. He said that Clay died because he was weak and that’s why he had been kicked out of the program yet that had been a lie. Clay had gotten kicked out because his insurance was only willing to pay for a month and so what Clay needed was a rehab that would understand why he was struggling. And the fact that Smith couldn’t see what had made the team suspicious.

They asked Garcia to run a background search on Smith and she found quite a few problems. She learned that Smith owned the facility that seven of the nine victims had used to get clean and that the man wasn’t even a doctor. He got a doctorate in business at an uncredited online university and so he didn’t want he was talking about when it came to rehabilitation. The closest thing he’s ever known about that was when he himself got clean after going to jail for assault. The team later confronted Smith what they found and he tried to run. Luckily, he didn’t make it far and so they arrested him for fraud. And they asked about his patients.

Smith knew that the game was up and he admitted that he used people as cash cows. He said that he didn’t try to help his clients because he wanted them to relapse in order to milk their insurance again and so he had no reason for wanting to kill his clients, but he might know who does. The team had read Clay’s sober diary and he mentioned a kind member of staff that said they’ll always be there for him. So the team went back to Smith to ask him about and unfortunately he had lawyered up by then. He knew that the team couldn’t touch him or his facilities because he would have real doctors checking in with the patients.

Smith walked right out of custody now that had his lawyer helping him and so he didn’t want to help anyone by turning over his payroll. The team had had to use another method. They realized the tattoo was one-half of an angel’s wings and so they questioned if the Unsub was tattoo the other half on himself. Once they figured that out, they had the profile of their Unsub. The Unsub was an Angel of Mercy. He thought he was helping his victims by killing them because he thought they would have relapsed eventually. It was typical that they were dealing with an Angel of Mercy. Those type of killers had the highest body count because it was easy to hide their victims as someone that died naturally.

The team followed the tattoo lead until they found a nurse. The nurse was Douglas Knight and he worked at various Smith’s facilities. He was there to comfort them when they needed a friend and sadly he drove one of Clay’s friends home that very same day, so they got the address for Molly Witt and they found Douglas as he was about to kill his next victim.

He would have gone ahead if Lewis hadn’t coached Prentiss. Prentiss talked about loving a husband who loved hid addiction more than her and how she had to let him go in the end even knowing that it could lead to him dying. And Douglas related.

Douglas’s wife had overdosed and he thought the others who he saw every day were suffering from the same thing, but it wasn’t the addiction that would have killed Molly and so Douglas handed her over.

And he turned himself in.

Meanwhile, Daryl had heard what Lewis said and he decided it was time to finally make amends for all that he put her through because she had meant something to him.