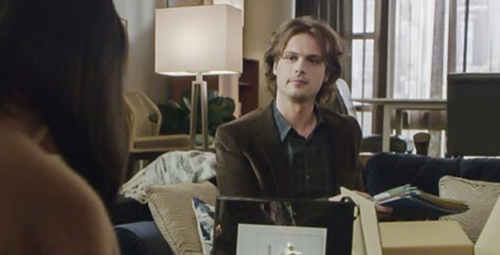 Tonight on CBS their hit drama Criminal Minds returns with an all-new Wednesday, March 14, 2018, episode, called “Last Gasp,” and we have your weekly Criminal Minds recap below. On tonight’s Criminal Minds episode season 13 episode 16 as per the CBS synopsis, “Away from the watchful eye of the FBI’s assistant director of national security, Linda Barnes (Kim Rhodes), the BAU meets in secret to investigate an UnSub who appears to be kidnapping and photographing young women.”

Barnes had ruined the BAU when she chose to gut the unit of its most talented agents on tonight’s all new episode of “Criminal Minds”.

Barnes had claimed she was trimming the fat however her policies were doing more to slow down the team than anything else because she had decided that they could only take cases that would look good in the media. She had only wanted to take on cases in which the victims were pretty and would garner sympathy from the public. Barnes had claimed that would look good for the unit’s public relations and she failed to understand that the other cases they the unit rejected carried consequences. JJ had tried to tell Barnes that twenty-six people had died since Barnes began cherry-picking their cases and that the BAU couldn’t save anyone unless they were actually allowed to do their jobs.

The team spent most of their time in the office since Barnes took over and they had to run each case pass Barnes until she allowed them to actually do their jobs, but JJ had tried to reach out to her and had gotten completely dismissed. Barnes had liked that sense of power she was getting from having the BAU under her thumb and so she didn’t want things to change. She hadn’t even cared if it was dysfunctional and so JJ eventually stopped trying to convince her. JJ gave up in the end because she knew Barnes wouldn’t care and so she just tried to do the part of the job she was allowed to. She looked through cases that had been submitted and was going over them when she got a call.

Garcia had been transferred over to Cyber Crimes and she had been on the computer when she noticed a pattern. She found pictures of someone taking pictures as they stalked the girls, then taking pictures of these girls in captivity, and his last picture of them was usually a port-mortem. He would arrange his victims’ bodies after he killed them and take one last picture of them before moving on to his next victim. The sad part was that Garcia had found another picture of a girl being stalked and so she had tried to take the case to her boss. Garcia told her boss that the Unsub had a pattern and that another young woman was in trouble, so she thought her boss would take the case and he wouldn’t. He said it had nothing to do with Cyber Crimes.

He did however suggest she take the case to another unit and so Garcia took the case to JJ. JJ had checked the case out herself and had quickly seen for herself that Garcia was onto something. She knew that there was a victim out there that could be kidnapped or about to be kidnapped and so she brought the case to Barnes. Barnes had taken one look at it and had said it was fake. She thought the whole crime scene had been staged and refused to believe that anything about the victims were real. Barnes said that the girls were most likely wannabe models who were taking fetish photos and so that had been the last straw for pretty much everyone. They knew that they couldn’t let another person to die and had later met up because they were going rogue.

The team had come together during their off hours to investigate the case on their own and so they first talked about the risks. If they were caught and this case did turn out to bogus then it would cost them all their careers. They wouldn’t be moved around anymore and would instead just be fired because they all knew Barnes wouldn’t care about why they went rogue. Barnes would see what they did as defiance and she would use that to dismantle the BAU, so the team eventually moved onto the case once they got the risks out of the way and they went over the pattern. The pattern that Garcia had noticed was clear and so they tried to find out how it was being shared.

The team went on the road to question the men that had gotten the photos and the men proved willing to talk once they found out the photos had been real. The men thought the girls had all been alive and had taken the photos willingly, but afterwards they told the team that the photos had come to them for free through the dark web and that they hadn’t known the Unsub personally. They had simply assumed he was a connoisseur like them and so the team decided to investigate the photos from a different end. They studied the pictures and had picked out a few identifying marks. Like a wine rack in the background.

It was filled with expensive wine and that meant the Unsub was a man of means. They theorized that the women were call girls and that the Unsub was wealthy enough to afford these call girls though there had been several things about the photos that had made the team believe that the Unsub wanted to “woo” his victims. He brought expensive wine into he picture and had staged in expensive negligee, so they questioned if he was recreating something. It could be something from his past that had left an impact on him and so they had looked into the other victims with similar MOs.

They ended up finding Tracy Ferguson. She was a young woman from a wealthy background that had been found in her hotel room in a negligee like the victims, but the team had needed more information on what happened to Tracy because she could have been the Unsub’s first victim and so they had to reopen the case. The case had apparently been sealed by Barnes when she worked in the area and so JJ decided to fall on her sword. JJ had gone to Barnes telling her that she had looked into the case and she had asked Barnes about it. Barnes had been upset her direct orders were ignored and that JJ seemed to think she was the only one that cared about saving people, so she talked about Tracy.

Tracy had been found in the hotel room after she had overdosed. She was a junkie and her father had cut her off however she had started turning tricks when she had gotten cut off and so there had been DNA from seven men that had slept with Tracy the night she died. Naturally, none of the men had come forward following Tracy’s death and her death was an accident. She had overdosed on heroin she bought and so Barnes had closed the case because she had wanted to protect Tracy’s father from the media. The media would have torn him apart and that’s why Barnes had gone the additional step of sealing the case. And she promptly fired JJ once had her say.

JJ had known that could happen and so she hadn’t cared about getting fired. She continued to investigate the case with her team and together they figured out who the Unsub was. The Unsub hadn’t been one of those men in the hotel room with Tracy, he had actually been Tracy’s stepbrother and they knew he had taken another victim when they learned a senator’s daughter was missing. The girl also had a drug problem and Kevin Peck had used that. He had made her think that he could show her a good time and had then kidnapped her because he was tired of call girls. Kevin had wanted to pick women of the higher class like his stepsister.

Tracy wanted nothing to do with Kevin when he was broke and had a crush on her. She had only started “caring” about Kevin when he came into his trust fund that her father had set up for him and so Kevin kept giving her thousands of dollars. He tried to use money to get her to love him and that never happened, so that’s when he tried to recreate Tracy’s death. He had wanted a chance of having some part of her and his obsession with recreating everything had helped the team figure out where he was going. He went to the same hotel where Tracy died and they found him before he could his latest victim.

Kevin had been in the middle of choking Jessica Mayhew when the team broke down the door and tore him away from her. The victim had still been drugged and so the team had rushed her to the hospital yet, before they could prepare themselves for what Barnes was going to do, Jessica’s father approached them. He had wanted to thank them for saving his daughter’s life and after learning the many problems they had with Barnes – he chose to intervene and Barnes removed from her supervisory rule while the team as in the actual team got put back together again. They all left their boring jobs and had been glad to be at work on tonight’s episode.