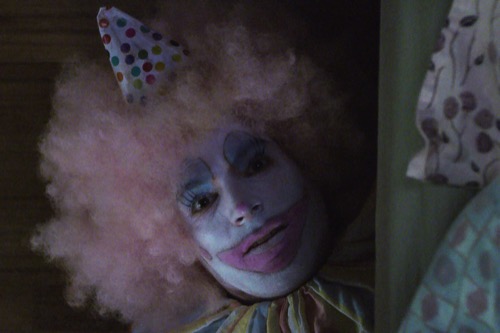 Tonight on CBS their hit drama Criminal Minds returns with an all-new Wednesday, March 21, 2018, episode, called “The Capilanos,” and we have your weekly Criminal Minds recap below. On tonight’s Criminal Minds episode season 13 episode 17 as per the CBS synopsis, “The BAU is called to Oklahoma to investigate a murderous clown terrorizing the sleepy town of Guymo.”

The team headed to Oklahoma on tonight’s all new episode of “Criminal Minds” when an Unsub crossed state lines.

The team were filled in on two cases in two different states when their Unsub crossed into Oklahoma to kill Mark Wilson. Wilson had been at home alone with his son Dylan and they were going to bed when the attack happened. The Unsub chose to only attack Wilson and leave the son alone, but Dylan had witnessed the crime and had been left in the house for hours with his father’s corpse before he worked up the courage to call for help. The team figured the child had wanted to stay as quiet as possible so the Unsub didn’t come back and the first thing they had wanted to do was talk to Dylan when they landed only there had been a problem. The child had blamed himself for not calling for help sooner and eventually gave up on talking altogether.

Fortunately, Dylan had told the police a few things before he stopped talking. He told them that a clown had attacked his father and at first the team believed he turned the Unsub into a clown because perhaps he was afraid of both though they changed their minds when saw Dylan’s drawings. The young boy had drawn the clown with so many specifics that couldn’t be possible that he made it up and so the team realized they were looking for someone that liked to dress up as a clown. It could have been part of the Unsub’s ritual and so they tried to connect with the others. The Unsub had attacked both of his victims with an axe and had carved into their faces as one final act before fleeing the scene.

The Unsub for some reason or another had carved a smile on each of the victim’s faces and he was doing it postmortem. Like he or she couldn’t leave the scene until they left the victims with a scar like maybe one they had on their own faces and so they looked at the victims again. The last victim had been Wilson and before him there had been a murder in Colorado of another family. That man had been the same dominate and males with families and so the team questioned if the victims could be surrogates. They could be stand-ins for the Unsub’s own father who might have abused them and so they the team tried to figure out how the Unsub was picking them. The victims were the same type in two different states and it had looked like there were near the back roads.

The Unsub was using the back roads in both towns to travel and remain undetected. That showed knowledge of the area and so they wondered if the towns meant anything to the Unsub on a personal level yet no matter how hard they tried they couldn’t understand the Unsub. It had seemed like the Unsub planned these things by picking the victim and at the same time there was still room for spontaneity. The Unsub picked the murder weapon at the scene and the first time it appeared that they walked in on the victim while with Wilson the Unsub had been lying in wait, so they didn’t start getting answers until the Unsub struck again. That time the Unsub had killed both the father and the mother.

The mother could have tried fighting him with her husband and that’s why the Unsub killed her however the Unsub hadn’t hurt the children in the house. They had been left alone while the Unsub wrecked havoc and so the team figured that they did in fact have a family annihilator who was someone that wanted to destroy the family. And often they also kill the children. The fact the Unsub hadn’t hurt the kid meant there was probably one in their life and the more they talked the more they realized that there was more than one Unsub. The Unsubs had a dominant and submissive relationship with the submissive one being enough of deterrent to stop the dominant one from wanting to destroy the entire family. Instead he merely left orphans in his wake because he was perhaps abandoned or at the very most felt that way himself.

Either way, the fact that there was two of them explained the many inconsistencies. The submissive might not even know the dominant was killing people and that would explain the eye-witness testimony. There had been a witness the last time and they had seen a clown running out of the house while the other one had kept the car running. So the team was realizing how unstable such a relationship was when Dylan began talking again. The young boy had remembered a lot more details about the man that was in his house and he told Reid that the clown smelled of horses and that he was wearing denim. Like someone involved in the rodeo scene and later on again another good piece of new fell right in their lap.

The Unsubs had tried to break into a house during the day and the security system as well the homeowner was able to scare them off, but not before the security system got a picture of their faces. The Unsubs was the Capilano brothers. They had been involved in the circus and rodeo scene for years except the older Capilano’s brother had a temper. He liked getting into fights and he had tried to cut the face of the man he was fighting with at the last respectable rodeo. That meant the brothers have had to rely on the less respectable sort. The type that’s constantly moving because they didn’t want the cops to find them and shut them down, so the team went looking for the brothers were working when the Capilano brothers had had their falling out.

Tony Capilano was the submissive and he realized his brother was too volatile in the end, so he was going to take his wife and son back on the road. They were going to move to Florida and start over though first they needed money for the road. Tony went back to the rodeo and he had been trying to make money when his brother Sal showed up. Sal hadn’t been the lovable clown like Tony, he wanted to be a daredevil like the father that had killed their mother and left them for the circus to raise. He just never made the cut and so that’s when he started killing people because he hadn’t been able to live without the adrenaline rush. And they found the Capilano brothers at the same rodeo because Sal just couldn’t let go of Tony.

Tony wanted to leave him behind and so Sal went to the rodeo to mess things up for him. But Sal went too far when he pulled a gun because Tony had wrestled it from him and would have killed his brother if the BAU hadn’t arrived. They told Tony that they knew he wasn’t like his brother and that he still had a family who needed him, so that got Tony to put down the gun only he’ll still do time. He might be put away from five to ten years for the part he played even if he hadn’t hurt anyone and so he asked his family to go to Florida without him. He told his wife that he didn’t want them to see him locked up. And so Tony’s family ended up losing him because he hadn’t been able to walk away from his brother while there was still time.