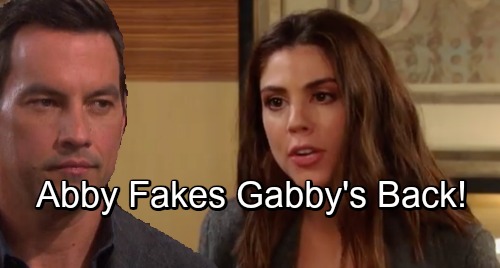 Days of Our Lives (DOOL) spoilers tease that Abigail (soon-to-be Kate Mansi) will come up with a new plan. She’s had plenty of time to think about her current predicament – at least when she’s not drugged up and out of it. Abigail’s stuck at the sanitarium and she’s obviously not happy about it. She’d accept her fate if she actually needed treatment, but that’s not the case.

Gabi (Camila Banus) is mainly to blame for this mess. She convinced Chad (Billy Flynn) that Abigail’s alters were back, so he talked Stefan (Tyler Christopher) into signing the papers. Now Abigail’s been committed and can’t see her brand-new baby girl. She’ll rip into Chad when he stops by for a visit, but Days spoilers hint that he won’t budge on his stance.

Chad will think he’s doing what’s best for Abigail’s mental health. After she fails to change his mind, Abigail will realize she’ll have to take matters into her own hands. She had hoped Stefan would be an ally, which is why she married him. Since Stefan turned on her, Abigail will think she has every right to turn on him, too. Stefan used her to get to Charlotte, so Abigail will use him to score her freedom!

Days of Our Lives spoilers say Abigail will have to put on a show. If Gabi can do it, so can Abigail. Ms. DiMera will deliver quite a charade and hope that it pays off. It appears she’ll summon Stefan and when he arrives, she’ll give him the reunion he’s been dreaming of. Abigail will pretend that Stefan’s precious “Gabby” is back for good. She’ll make him believe they can be a real family with Charlotte.

Stefan might be skeptical at first, but it shouldn’t be too hard to win him over on this. There’s nothing he’d love more than to be with “Gabby,” so he’ll see what he wants to see. Days of Our Lives spoilers say Stefan will get to work ASAP. He’ll get the ball rolling on Abigail’s discharge papers, so she’ll be out of Bayview faster than you can say “duped.”

Abigail will play along for a bit, but she’ll drop the DOOL truth bomb when the moment’s right. “Gabby” hasn’t returned, so this is just the first step toward Abigail’s revenge. She’ll be determined to make Stefan pay, take back her baby and expose Gabi for the ruthless monster she really is.