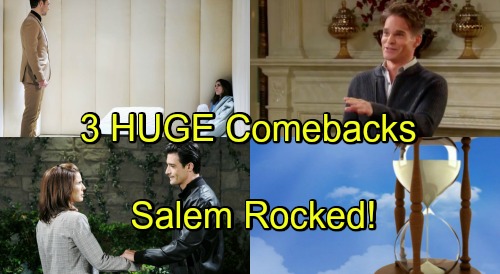 Days of Our Lives (DOOL) spoilers tease that we’ve got some comings and goings news to share. Some big returns are set to happen this week, so here’s the scoop on what’s ahead. For starters, let’s talk about Kate Mansi’s comeback as Abigail. DOOL fans have been awaiting the Abby transition for a while now, but Mansi’s finally going to be back on screen soon.

As you might expect, Abigail will remain furious and frustrated. She’s trapped at Bayview thanks to the plot Chad (Billy Flynn) and Stefan (Tyler Christopher) carried out. Abigail will fret over her baby being ripped from her as well. Little Charlotte is stuck with her monstrous fake father! Stefan isn’t really the kid’s dad, so that blow’s sure to shake him up down the road.

In the meantime, Abigail will unleash her wrath. Days of Our Lives spoilers say Chad will visit his ex at the sanitarium. He’ll be caught off guard by the intensity of Abigail’s rage. Look for Mansi to make quite a splash with her return scenes on November 29.

In other news, Greg Rikaart is coming back to Salem as Leo. His next airdate will be November 26, so DOOL viewers will want to check out all the chaos. Days of Our Lives spoilers say Will (Chandler Massey) and Sonny (Freddie Smith) will freak over Leo’s warning. He’ll threaten to take them down for attempted murder and the cover-up that followed, so they’ll be forced to obey orders.

In an interview with Soap Opera Digest, Rikaart talked about how thrilled he is over this part. “Playing this character has been one of the most fun experiences of my career, especially this time,” Rikaart said. “He was so fun the first round, but coming back we see more and more layers to Leo and learn more about him.” Days of Our Lives spoilers say Leo has plenty of surprises in store!

Gilles Marini will also reappear as Ted this week. The cutthroat lawyer is in some trouble, so he’ll need Hope’s (Kristian Alfonso) help. Ted will want protection from Stefan and Kate (Lauren Koslow), but he’ll push Hope to leave Rafe (Galen Gering) out of it. Hope will have some reservations about that, but Ted will convince her that the situation is dire. A risky alliance will form, so stay tuned for hot drama.

That’s it for comings and goings! We’ll give you updates as other Days details emerge. Stick with the NBC soap and don’t forget to check CDL often for the latest Days of Our Lives spoilers, updates and news.