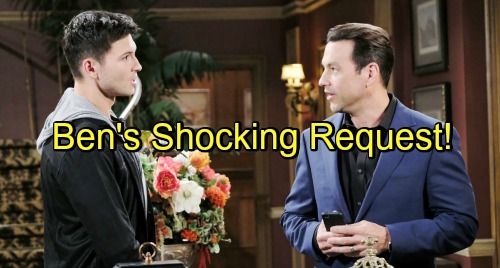 Days of Our Lives (DOOL) spoilers tease that Ben (Robert Scott Wilson) will continue his job hunt this week. He’s had trouble scoring one in Salem for obvious reasons. Not too many people want to hire a serial killer – no matter how reformed he claims to be! Of course, most of the positions available in town are also connected to Ben’s victims. It’s pretty easy to see why Ben remains unemployed.

However, Ben’s awfully persistent. He doesn’t want to leave town, especially now that he’s finally got a shot with Ciara (Victoria Konefal). That’s why Ben will dig his heels in and really focus on this. He’ll make it his mission to get some money coming in quickly.

DOOL fans know that Ben recently completed a task for Chad (Billy Flynn). It was an unlikely alliance, but Chad really needed Ben’s help. Although Ben wasn’t keen on causing more misery, he felt like he owed it to Chad. Plus, he needed the cash! Ben ended up putting both a bodyguard and Stefan (Tyler Christopher) in a chokehold, which allowed Chad to kidnap Abigail (soon-to-be Kate Mansi).

Days of Our Lives spoilers say Ben will pay Chad another visit. He’ll wonder if Chad might have any other jobs for him to do, but he may be out of luck. That was a one-time thing and Ben’s skills are kind of specific. Chad doesn’t go around abducting people every day and he doesn’t have much use for a bartender.

Ben might wonder if Chad can find a place for him at the company he runs, but that plan may not pan out. It doesn’t make much sense to let Ben don a suit and go to work at Titan, especially since Victor (John Aniston) probably wouldn’t allow it. Ben might be able to worm his way in, but Days viewers should consider another option.

Days of Our Lives say Ben will meet with Stefan this week. It looks like he’ll seek employment with him as well, but will Stefan go for the idea? He might hold a grudge over the chokehold incident, but not if he thinks Ben can actually be useful. Perhaps Stefan could use another bodyguard, especially since Ben overpowered the other one so easily.

One way or another, Ben will find a source of money. He has to so he can afford his first date with Ciara! That magical evening will be coming up during the week of December 3-7, so stay tuned. We’ll give you updates as other Days news emerges. Stick with DOOL and don’t forget to check CDL often for the latest Days of Our Lives spoilers, updates and news.