Days of Our Lives spoilers: Ben Opens Up, Connects With Ciara At The Cabin – A Relationship Blossoms 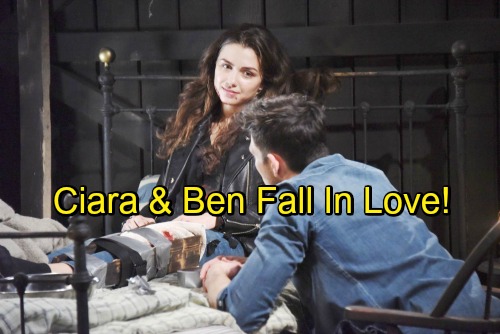 Days of Our Lives (DOOL) spoilers tease that we’re in for some interesting interactions between Ben (Robert Scott Wilson) and Ciara (Victoria Konefal) coming up. Ben, who was dropped off at the outskirts of Salem by Chad (Billy Flynn), found Ciara unconscious on the side of the road. He’ll take Ciara to a cabin and tend to her wounds.

Ciara will be in a real predicament. Her leg will be injured and she’ll be unable to escape or let anyone know where she is. She knows just how dangerous Ben is, but she’ll be immobile and will be forced to interact with him. She’ll probably figure that her best bet for survival is to engage with Ben and get him to see her as a friend.

It looks like Ben will respond well to Ciara, and he won’t be looking to strangle her any time soon. Maybe he is truly reformed! Days spoilers say that Ben will even open up to Ciara and share a disturbing moment from his childhood while they’re in the cabin. Perhaps Ben had a difficult relationship with one of his parents, or maybe he was bullied in school. Whatever the case, it seems that he will find Ciara to be someone he can trust with this information.

Ciara may end up relating to Ben in a way. She has been feeling “damaged” lately, with her inability to get intimate with Tripp, and she felt the sting of rejection when she saw Tripp (Lucas Adams) move on so quickly with Claire (Olivia Rose Keegan). Ben probably feels damaged and rejected, too, so maybe these two can relate to each other on some level.

Ciara may not want to admit it, but she and Ben have something in common. She may end up feeling empathy for him, and what started out as a captor/captive relationship might blossom into a friendship, or even more. If it turns out Ben is truly reformed, there might be the possibility of a romantic relationship between these two. Imagine what Hope (Kristian Alfonso) would have to say about that!

Will Ben and Ciara bond at the cabin? And will Ciara open up to Ben the way he opens up to her? Stay tuned to DOOL and don’t forget to check CDL often for the latest Days of Our Lives spoilers, updates, and news.