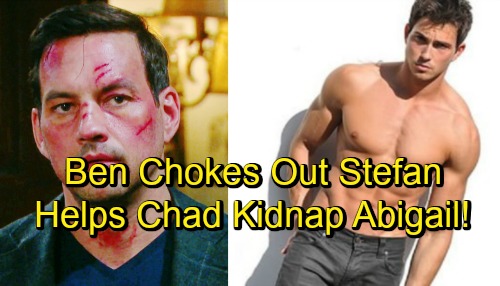 Days of Our Lives (DOOL) spoilers tease that Abigail (Marci Miller) will keep making bold moves. She recently pulled off a shocker by divorcing Chad (Billy Flynn) and marrying Stefan (Tyler Christopher). Next, Abigail will stun Kate (Lauren Koslow) with another sneaky strategy. She’ll do something cutthroat that catches Kate off guard.

Of course, Stefan will love every minute of it. He thinks “Gabby’s” coming back to him, but he may not even mind if she doesn’t. If Abigail keeps acting like this, Stefan would be happy to have her instead. He might think he can win Abigail over and still get the perfect DOOL family he’s dreaming of.

However, Chad will fume over his arrogant brother. He’ll feel like Stefan’s exploiting Abigail’s mental illness again. Days fans know Gabi (Camila Banus) is behind the planted wig, Abigail’s memory gaps and everything else. Too bad Chad isn’t in the loop! He thinks Abigail’s losing it, especially since she suddenly married her rapist.

On the bright side, Chad’s fighting for his wife on some level. Even though he’s wrong about committing Abigail, his heart is in the right place. That good heart will lead Chad to do some desperate things – including teaming up with Ben Weston (Robert Scott Wilson)! Chad will get a little help from Ben as he works to kidnap Abigail. Ben’s done it before, so he’s certainly the right person to call.

Nevertheless, Ben’s involvement may be kept to a minimum. Days has him on the path to redemption, so he shouldn’t screw that up. Ben will want Abigail to get the mental assistance she needs, which might be why he agrees. It seems he’ll mostly be focused on handling Stefan anyway. Chad can probably take care of the rest.

Days of Our Lives spoilers say Ben will get into a fight with Stefan on next week’s new Days episodes, November 5-9. He’ll end up putting the smug DiMera in a chokehold. Chad previously beat his brother to a pulp, so Stefan obviously isn’t very tough. Once Stefan’s facing Ben and his fierce biceps, he’ll really be in trouble. Stefan will quickly be overpowered, so Chad will have a chance to swoop in and abduct Abby.

It sounds like Days of Our Lives has some serious excitement in store. We’ll give you updates as other news comes in. Stay tuned to DOOL and don’t forget to check CDL often for the latest Days of Our Lives spoilers, updates and news.