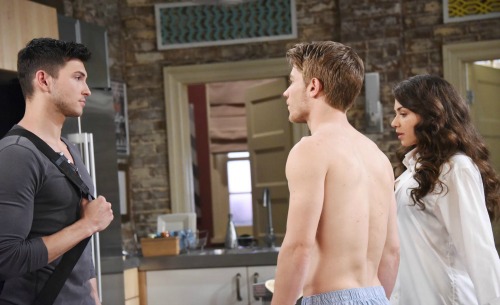 Days of Our Lives (DOOL) spoilers tease that Ciara (Victoria Konefal) will get some shocking news. After committing to Tripp (Lucas Adams) and making love to him, some startling developments will leave her reeling. As most DOOL viewers expected, Ben (Robert Scott Wilson) was framed. The evidence against him was planted, so he’ll want to tell Ciara ASAP.

It crushed Ben to see Ciara lose faith in him, but he’ll probably be understanding about it. Although Ben’s on a better path now, his past is awfully tough to overcome. Ben was mentally ill during his time as Salem’s necktie killer. However, the fact is he murdered several innocent people and manipulated plenty more. Ciara had every reason to fear Ben might’ve reverted to his previously crazy behavior.

That’s especially true since there have been so many naysayers. Hope (Kristian Alfonso) and Tripp were particularly adamant that Ben hadn’t changed. They just didn’t see how someone like him could turn from his wicked ways. Ciara finally bought their claims thanks to the “proof,” but she’s about to see how wrong she was.

Days of Our Lives spoilers say Ben will drop the bomb on Ciara. He’ll let her know that he’s been cleared of the crime. Ben didn’t set the cabin fire, so he’ll hope Ciara can trust him again. You can bet Ciara will apologize for thinking the worst of him.

Despite Ben’s twisted history, he’s been nothing but good to Ciara. Ben had a flash of nuttiness when he went off his meds, but Ciara was never in any real danger. She was able to talk Ben down, so she knows there’s a kind heart in there. Ciara will hate that she potentially damaged their growing bond.

Of course, this will complicate things on the romantic front. What will Ciara do about her commitment to Tripp? She clearly has feelings for Ben, but she may try to stick with the friendship goal. Days of Our Lives spoilers say that plan obviously won’t work out!

Ben and Ciara will share some warm moments in the coming weeks. Sparks are definitely going to fly, so Ciara will have to accept how she feels. If Tripp’s to blame for the planted evidence, that’d be an easy way to break up “Tiara.”

Regardless, it’s easy to see that Ben’s the one Ciara wants. Days should keep pushing them closer, so “Cin” fans should enjoy their growing connection. We’ll give you updates as other Days details emerge. Stay tuned to DOOL and don’t forget to check CDL often for the latest Days of Our Lives spoilers, updates and news.