Days of Our Lives Spoilers: Billy Flynn Set to Exit DOOL as Chad – What Does It Mean for Chabby’s Future? 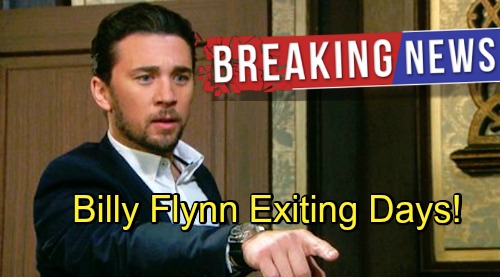 Days of Our Lives (DOOL) spoilers tease that another NBC soap star is set to depart. DOOL fans know that Stephen Nichols (Steve), Marci Miller (Abigail) and Christopher Sean (Paul) have all finished filming. Their final scenes have yet to air, but they’re definitely done at Days. Unfortunately, one more name is about to join the exit group. It looks like Billy Flynn (Chad) is on his way out the door.

DOOL buzz recently surfaced on this possibility, but now it’s pretty much certain. According to reliable message board moderators and Days insiders, Flynn’s out and will be leaving the role of Chad DiMera behind. Word has it Flynn will wrap up his stint this October, but will continue to air into spring of next year.

Of course, this news will come as a surprise to many Days viewers. Flynn had hinted at leaving the show, but ultimately signed a new contract. However, things can change rapidly behind the scenes. There’s a chance that Miller’s departure and Kate Mansi’s return had something to do with this decision.

No one knows for sure if Flynn was fired or simply wiggled out of his contract somehow. Mansi’s comeback is said to be short-term, but Days was supposedly trying to get her to stay longer. If that plan fell through, Days of Our Lives might’ve decided to give “Chabby” a happy ending and send them off screen together.

Then again, the show could recast Chad or simply let Abigail stick around alone. In those cases, Flynn might’ve chosen to bail. There’s always been gossip about Mansi and Flynn not being the best of friends on set. They’re undoubtedly polite professionals, but that doesn’t mean they enjoy working together.

There’s nothing wrong with that. Sometimes personalities just don’t mesh and that’s OK. Flynn and Mansi certainly never let it show in their fantastic performances. Their version of “Chabby” has plenty of chemistry. Still, behind-the-scenes tension could be a reason for Flynn to bow out after previously agreeing to stay.

Regardless, the point is Flynn is apparently headed for the exit door. Days of Our Lives spoilers say Chad and Abigail have a long and winding road ahead of them. Will they live happily ever after in the end or will Gabi (Camila Banus) spark a split? Will the truth about the baby’s paternity change anything?

DOOL watchers will want to check out all the upcoming action. We’ll give you updates as other Days details emerge. Stick with the NBC soap and don’t forget to check CDL often for the latest Days of Our Lives spoilers, updates and news.