Days of Our Lives Spoilers: Bonnie Drops A Bombshell – Lucas Fathered Her Child

BY hellodrdavis on August 28, 2018 | Comments: one comment
Related : Days of Our Lives, Soap Opera, Spoiler, Television 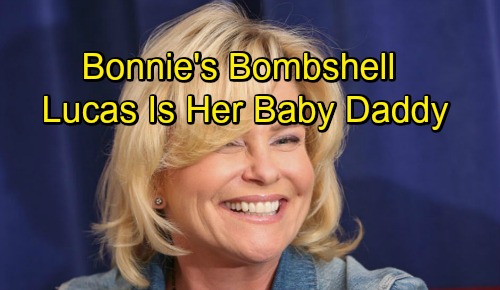 Days of Our Lives (DOOL) spoilers tease that Bonnie (Judi Evans) will have some shocking news for Lucas (Brian Dattilo). Bonnie, who was recently hauled in to the Salem PD by Steve (Stephen Nichols) at Adrienne’s (Judi Evans) request, always seems to have a trick up her sleeve. She’s a con artist who’s always scheming, and she’s usually looking for her next meal ticket.

It looks like Lucas will be her next target. Days of Our Lives spoilers say that Bonnie will drop a bombshell on Lucas, but what could it be – according to SOD it’s a child! Well, there’s one glaring possibility. Back in 2017, Bonnie and Lucas were together when Bonnie was impersonating Adrienne. “Adrienne” then dumped Lucas, sending him into a downward spiral of drinking and depression. And at a later point, Bonnie and a drunken Lucas had sex.

According to Days spoilers, Bonnie will drop a baby bombshell on Lucas, claiming that she had a child and that he is the baby daddy! Of course, there are some considerations here. Is it possible that Bonnie, at her age, could have conceived a child? The chances are slim, but yes, it’s possible!

So, possibility #1 is that Bonnie indeed got pregnant by Lucas, had the baby, and now wants Lucas to cough up child support money. If Bonnie’s looking for a meal ticket, she’d probably love to target a Horton, and a baby would be perfect way to do it.

Possibility #2 is that Bonnie may claim that she had Lucas’ child, but it’s just another one of her scams to get his money. Of course, if it’s all a scam, Bonnie would run into trouble when Lucas actually wanted to meet his new son or daughter.

That leads us back to possibility #1 – that Bonnie actually had Lucas’ baby. The timing would certainly add up, given that Bonnie and Lucas were together in 2017. But how would Steve have missed that Bonnie has a baby when he tracked her down? And where is the baby now?

It’s all a wild idea, but stranger things have certainly happened on DOOL. Do you think that we’re going to be welcoming a new little Lockhart-Horton baby to Salem soon? Stay tuned to DOOL and don’t forget to check CDL often for the latest Days of Our Lives spoilers, updates, and news.