BY hellodrdavis on July 1, 2018 | Comments: one comment
Related : Days of Our Lives, Soap Opera, Spoiler, Television 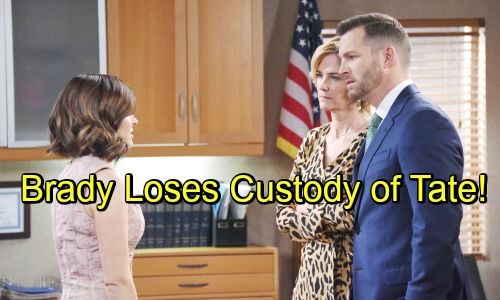 Days of Our Lives (DOOL) spoilers tease that things are going to heat up at Tate’s (Colin and Kyle Schroeder) custody hearing. So far, the judge hasn’t seen any reason to declare Brady (Eric Martsolf) an unfit father, so things haven’t been looking good for Theresa’s (Jen Lilley) effort to get sole custody. But it looks like that’s going to change.

Theresa’s lawyer Ted (Gilles Marini) promised to dig up some dirt on Brady that Theresa could use against him. And it looks like he’s going to discover the secret that Brady’s been keeping about Deimos’ (Vincent Irizarry) murder.

As a bit of background, Brady knows that Nicole (Arianne Zucker) murdered Deimos. In fact, Brady blackmailed Nicole with that information, driving her away from Eric (Greg Vaughan) and out of Salem. These are definitely facts that Brady would like to keep out of the custody hearings!

Brady’s really going to be in the hot seat. He may be in the position of looking like he committed the murder if he’s not willing to disclose the killer’s identity. And if he doesn’t disclose the killer’s identity, he could be guilty of obstructing justice. Plus, Days spoilers say that Brady will have added pressure from Eve to throw Nicole under the bus to clear his name.

What a mess. No matter what, Brady’s not going to look like the kind of upstanding person the judge wants to have custody of a child. Brady could lose this thing, and it’s also likely that he could agree to give full custody to Theresa just to put an end to all the questions about Deimos’ murder.

Brady’s past decisions regarding Nicole could really impact this custody case. Do you think that Brady will lose custody of Tate? Stay tuned to DOOL and don’t forget to check CDL often for the latest Days of Our Lives spoilers, updates, and news.