BY hellodrdavis on December 1, 2018 | Comments: one comment
Related : Days of Our Lives, Soap Opera, Spoiler, Television 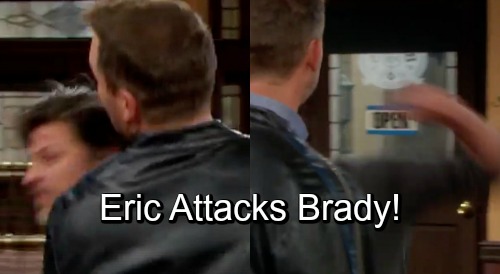 Days of Our Lives (DOOL) spoilers tease that Brady (Eric Martsolf) is in for a rude awakening. He’s been laying low ever since Nicole’s (Arianne Zucker) death and giving Eric (Greg Vaughan) space. The brothers spent Thanksgiving apart and Eric has generally wanted nothing to do with Brady since Nicole perished in the fire.

Eric blames Brady for Nicole’s death. Brady didn’t start the fire or cause the explosion that ultimately took Nicole’s life, but as far as Eric’s concerned, Nicole never would have been in Memphis with Xander (Paul Telfer) had it not been for Brady. For Eric, Brady’s the root cause of his and Holly’s (Harlow and Scarlett Mallory) devastating loss.

But Brady will soon decide that it’s time to patch things up between himself and his brother. According to Days of Our Lives spoilers, Brady will want to make amends with Eric, but how’s he going to pull that off? Eric wants nothing to do with Brady and has declared that the two are no longer brothers.

Nevertheless, Brady will do his best and make a heartfelt plea to Eric. Brady will probably point out that while he made a terrible mistake when he blackmailed Nicole and forced her out of Salem, he never wanted to harm her, and he certainly never wanted her to die. He might point out that he, too, loved Nicole and would take it all back if he could.

Unfortunately, though, Eric won’t be into Brady’s apology. Eric is still raw from Nicole’s death, and although he’s putting on a brave face for Holly, he’s still torn up inside. Plus, he’s still very angry with Brady, and it looks like he won’t be able to control his anger. DOOL spoilers show Eric attacking Brady, so it sure doesn’t look like amends will be made between the brothers anytime soon.

The whole situation is unfortunate, because Eric could really use the support of a brother right now. Do you think that Brady and Eric will ever reconcile? Stay tuned to DOOL and don’t forget to check CDL often for the latest Days of Our Lives spoilers, updates, and news.