BY Heather Hughes on May 31, 2018 | Comments: one comment
Related : Days of Our Lives, Soap Opera, Spoiler, Television 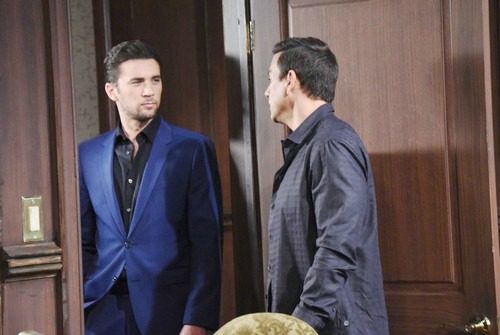 Days of Our Lives (DOOL) spoilers tease that an intriguing business opportunity is headed Chad’s (Billy Flynn) way. While Abigail’s (Marci Miller) in Boston with Laura (Jaime Lyn Bauer), Chad will take some time to focus on his career and seek revenge. Luckily, his next storyline can knock both of those out at once.

DOOL fans know that Chad recently quit his job at DiMera Enterprises. He couldn’t stay and work for the man who raped his wife. Chad absolutely loathes Stefan (Tyler Christopher) for what he did to Abigail. He wants his brother to pay, but this Days situation is tricky. Stefan has become a powerful force in Salem, so Chad needs some power to take him on.

It turns out Sonny’s (Freddie Smith) misfortune will become Chad’s stroke of luck. Victor (John Aniston) fired Sonny over the sexual harassment scandal, so he’ll be looking for a new leader. Chad will think he could be the perfect fit.

Victor would’ve handed control over to Brady (Eric Martsolf) if it hadn’t been for all the Theresa (Jen Lilley) drama. Next week, Brady will blast Victor for his advice regarding Chloe (Nadia Bjorlin). Victor and Theresa made a pact of silence, so Brady will be done with both of them.

Even if Vic wanted Brady to run Titan, it sounds like Brady wouldn’t take the job. He’ll probably be busy trying to win Eve back instead. Thankfully, Titan will still have someone capable on the throne. Chad proved himself as a solid CEO at DiMera, so he’ll have no problem sliding right in at Titan and getting things done.

However, Sonny may or may not be too happy about this. He considers Chad to be a close friend, so he could view this as a betrayal. Then again, Sonny might decide he’d rather have Titan in the hands of someone he trusts – at least for now. The real issues could come when Sonny’s name is cleared and he inevitably wants his power back.

In the meantime, Days of Our Lives spoilers say Chad will roll up his sleeves and get to work. He’ll take some risks as he tries to make Stefan suffer. Chad has physically attacked Stefan on multiple occasions, but the blows will come on the corporate level this time around. It looks like a major brother battle is brewing on Days!

Are you rooting for Chad to destroy Stefan’s empire and rebuild it himself? Can Chad truly take down Stefan or is his bro too formidable? We’ll give you updates as other Days of Our Lives news comes in. Stick with DOOL and don’t forget to check CDL often for the latest Days of Our Lives spoilers, updates and news.