Days of Our Lives Spoilers: Chad Kidnaps Abigail to Save Her from Stefan Marriage – Hostage Abby Gives Birth 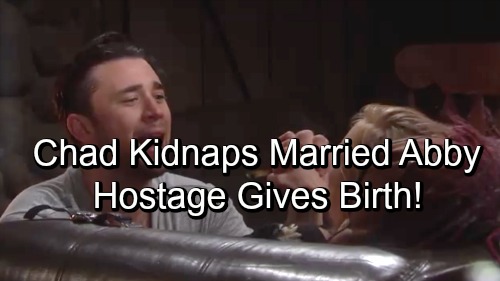 Days of Our Lives (DOOL) spoilers tease that some sneaky plans will go awry. DOOL fans know Gabi’s (Camila Banus) cooked up an elaborate scheme. She’s slowly convincing Abigail’s (Marci Miller) family that she’s gone off the deep end. Chad’s (Billy Flynn) on the verge of having his wife committed, so Abigail will decide to do something drastic.

With some help from Stefan (Tyler Christopher), Abby will score a quickie divorce. The next step will be making Stefan her new husband. Stefan would rather have “Gabby,” but he probably won’t object to the real thing either. Plus, he can always hold out hope that Abigail’s wrong. Stefan would welcome “Gabby” with open arms if she returned one day.

As a bonus, Stefan can rub this in Chad’s face and gain a little more power. Days of Our Lives spoilers say Abigail will marry Stefan and drop the bomb on Chad. He’ll really think she’s out of her mind at that point! Chad will beg Abigail to see that this is a horrible idea, but she’ll think it’s her only option. She’ll insist that she wasn’t going to let Chad lock her up.

It turns out Chad will ultimately do that that anyway. Days spoilers say Chad will see Abigail’s marriage shocker and arrange her kidnapping. He’ll become desperate enough to snatch Abigail from her home and take her away from Salem. This abduction will lead to worse problems than Chad ever anticipated.

Days of Our Lives spoilers say Abigail will be pretty fed up with Chad. She definitely won’t stay with him willingly, so this will be a true hostage situation. Abigail always seems to end up in those for some reason! You might recall that Abigail was kidnapped by Ben (Robert Scott Adamson) when she was pregnant with Thomas. She was forced to give birth in a cabin without doctors or drugs.

History will repeat himself, but this time Chad will be Abby’s captor. At least we know Chad loves Abigail and only wants what’s best for her. He’ll nearly let Abby go, but that’s when disaster will strike. Abigail will go into labor, so Chad will have to deliver the baby – his own baby! He just won’t be in the loop on that part yet.

Some exciting material’s coming up over the next few months. We’ll give you updates as other Days news emerges. Stick with DOOL and don’t forget to check CDL often for the latest Days of Our Lives spoilers, updates and news.