Days of Our Lives Spoilers: Chad Shocked by Kate’s Confession – Threatens to Expose Leo Scheme If She Can’t Fix Mess 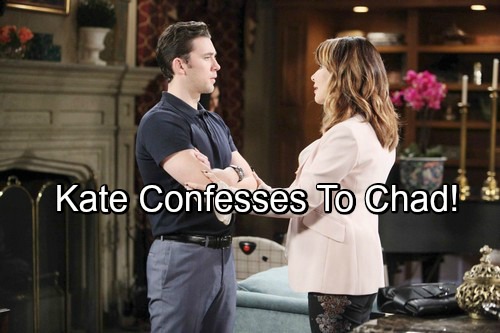 Days of Our Lives (DOOL) spoilers tease that Chad (Billy Flynn) will make quite a power play. He can’t work with Stefan (Tyler Christopher) after everything that happened with Abigail (Marci Miller), so he needs a new job. Fortunately, there’s a big one waiting for him over at Titan. Chad’s qualified and Victor’s (John Aniston) in a bind, so it sounds like everything will come together for him.

In a perfect world, Victor would love for Brady (Eric Martsolf) to settle down with Theresa (Jen Lilley) and become Titan’s CEO. However, Days spoilers say Brady will do his best to fight that scenario. After Eve (Kassie DePaiva) proposes a new plan, Stefan (Tyler Christopher) will offer some cash and help them get out of their jam.

Of course, it won’t be long until Stefan does some backstabbing. While Eve and Brady battle regrets, Chad may be on the fast track to the top. Next week, Days of Our Lives spoilers say Chad will pitch himself as a CEO candidate. Victor may decide to hire him on the spot!

It’s not like Vic’s got people lined up around the block or anything. Victor couldn’t trust Xander (Paul Telfer), so Chad’s his best bet. Taking over Titan right now should be an incredibly difficult task. Thanks to duped Sonny (Freddie Smith), sexual harassment allegations are swirling. There’s major DOOL turmoil going on and it’s undoubtedly affecting their business.

Leo’s (Greg Rikkart) accusations aren’t true, but the public doesn’t know that. The company’s in crisis mode, but Chad’s used to uphill battles. He should point to his work at DiMera and suggest that he was poised for success until Stefan appeared.

Later, it looks like Chad will meet up with Kate (Lauren Koslow) and share his Titan plans. She’s sure to be thrown for a loop. On June 22, Days of Our Lives spoilers state that Kate will make a shocking admission. She’ll fill Chad in on something huge the day after his pitch.

Kate will likely confess that she took over Vivian’s (Louise Sorel) scheme and has been targeting Titan. She may spill the Leo details and warn Chad not to accept the CEO spot. Since Chad is friends with Sonny, he certainly won’t stand for this. Chad might vow to expose Kate’s plot if she can’t fix the mess.

In the meantime, Chad may take over Titan and hope Kate can work fast. Days spoilers say Kate will indeed be scrambling soon, so stay tuned. We’ll give you updates as other news comes in. Stick with DOOL and don’t forget to check CDL often for the latest Days of Our Lives spoilers, updates and news.