BY Heather Hughes on May 24, 2018 | Comments: 3 comments
Related : Days of Our Lives, Soap Opera, Spoiler, Television 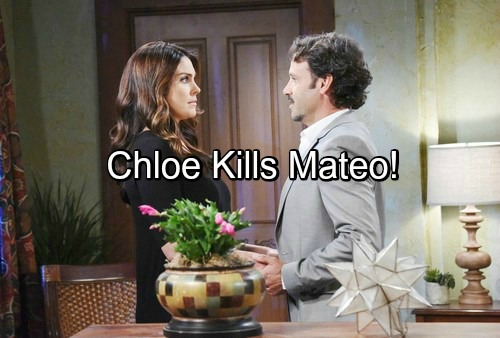 Days of Our Lives (DOOL) spoilers tease that John (Drake Hogestyn) and Paul (Doug Davidson) will risk their lives to save Chloe (Nadia Bjorlin). As usual, these DOOL heroes will do whatever they can to help. Unfortunately, bravery isn’t enough to defeat the infamous El Fideo. It won’t take long for Paul and John’s mission to hit a snag.

Mateo (Andoni Gracia) has plenty of guards and other minions at his hideout. The place is crawling with lackeys who put Mateo’s well-being above all else. Days of Our Lives spoilers say John and Paul will quickly be captured. They’ll fear the worst as evil Mateo gains the upper hand.

You can bet Mateo will take great delight in making them sweat. He’ll probably talk about all the ways he’s going torture them. Mateo certainly won’t appreciate two random Salemites showing up. He’ll be even more upset that they’re trying to rob him of his new obsession.

Now that Theresa’s (Jen Lilley) gone, Chloe is the only woman Mateo cares about. He’s convinced he’s going to win her over, so he won’t approve of John and Paul stirring up trouble. Days spoilers say Mateo will prepare to kill this father and his son. It’s clear that major drama will go down next week!

However, Chloe has no intention of letting her escape route slip away. Furthermore, she’ll be sick and tired of watching Mateo wreak havoc. We can’t forget that Chloe believes Theresa is dead. She’ll refuse to let Mateo murder two more people, especially since she’s the reason for their arrival.

Days of Our Lives spoilers state that Chloe will take matters into her own hands. She’ll kill Mateo and insist that they have to get out of there. Chloe won’t want any of Mateo’s loyal servants seeking revenge. They could always track her down in Salem, but that doesn’t seem likely. DOOL probably just wants to wrap things up. The whole scenario was mainly a way to get Theresa home anyway.

Thankfully, Chloe will soon return to Salem with Paul and John. Days spoilers say they’ll all share happy reunions with their loved ones. Chloe will be glad that her nightmare’s finally over. She’ll thank Lucas (Bryan Dattilo) for never giving up on her and they’ll begin a new chapter together.

Are you excited about the Mexico mayhem? Are you happy Chloe will be the one to save the day? We’ll give you updates as other DOOL news comes in. Stick with the NBC soap and don’t forget to check CDL often for the latest Days of Our Lives spoilers, updates and news.