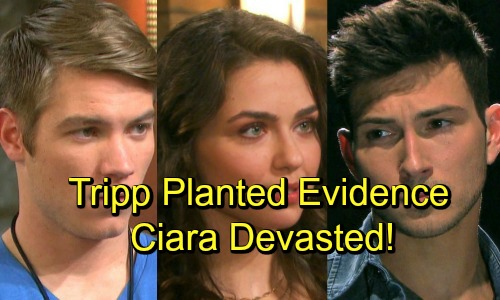 Days of Our Lives (DOOL) spoilers tease that Ciara (Victoria Konefal) may be in for a shock. She has gotten a lot closer to Tripp (Lucas Adams) recently. The two declared their love for each other and made love, and Ciara asked Ben (Robert Scott Wilson) to move out of the loft. Even though Ben has been cleared of setting the cabin fire by the Salem PD, Ciara still wanted Ben gone so that she and Tripp could forge a future together.

But sooner or later it’s going to dawn on Ciara that someone deliberately set Ben up to look like he’d set the fire. Thus far, Ciara has dismissed the notion that Hope (Kristian Alfonso) planted the evidence, but the fact remains that someone did. Given that Ciara really does care about Ben, she might find herself wondering who it was, and whether this person will ever be held accountable.

It looks like Hope and Rafe (Galen Gering) will be on the hunt for the person responsible for planting the evidence. It would have to be someone with a vested interest in making sure Ben goes back behind bars. It looks like it wasn’t Hope, as she was genuinely surprised to find out that Shawn’s (Brandon Beemer) investigation showed that the evidence was planted. So, who could it be?

Well, there are two other people who would have reason to set Ben up. One is Eve (Kassie DePaiva), who absolutely loathes Ben for killing her daughter back when he was the necktie killer. But Eve has been completely wrapped up in the Brady (Eric Martsolf) custody drama and the Kristen (Stacy Haiduk) wedding drama. It doesn’t seem like Ben’s really been on Eve’s mind lately, or that she’d have had the time to plant evidence.

The other person who stands out as a possible suspect is Tripp. Tripp certainly has an interest in keeping Ciara away from Ben, and especially in “proving” to Ciara that Ben is dangerous. What if Tripp transferred Ben’s fingerprint onto the can of accelerant? He would certainly have access to Ben’s fingerprints, since they lived together at the loft.

If Tripp turns out to be the person who planted the evidence against Ben, then Ciara’s going to be devastated. Finding out that Ben planted the evidence was a big factor in her decision to move forward with Tripp. She may feel that she was misled into being with (and sleeping with) Tripp, and that will probably infuriate her. In fact, it will probably mean the end of Tripp and Ciara.

It remains to be seen who planted the evidence, but Tripp sure did have a good motive and plenty of opportunity to lift Ben’s fingerprints and transfer them to the can of accelerant. If Tripp did plant the evidence, look for a major showdown between him and Ciara, as Ciara’s going to be furious.

Do you think it was Tripp who planted the evidence against Ben? Stay tuned to DOOL and don’t forget to check CDL often for the latest Days of Our Lives spoilers, updates, and news.