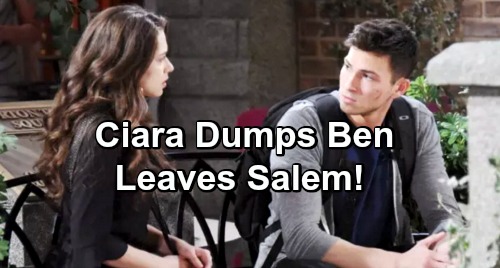 Days of Our Lives (DOOL) spoilers tease that Ciara Brady (Victoria Konefal) will once again face doubts about Ben Weston (Robert Scott Wilson). Her faith in him has been pretty strong, but she’s definitely had moments where it faltered. Hope Brady (Kristian Alfonso) was determined to convince Ciara that Ben started the fire and for a while, Ciara bought the idea.

However, Ciara’s all in on Ben’s transformation now. She knows he wasn’t behind the arson and she’s certain he’s a changed man. Ciara doesn’t care about the naysayers as long as Ben keeps proving he’s reformed. Unfortunately, Ben’s latest stunt will cause a huge setback in their new romance. Ciara will realize Ben may not be quite the person she thought he was.

DOOL fans know Ben works for Stefan DiMera (Tyler Christopher). Ciara isn’t thrilled about that, but she understands that Ben desperately needed a job. It’s not like anyone else in Salem was eager to hire a serial killer, so Ben’s options were limited.

Still, Ciara expected Ben to keep his standards high. She figured Ben would refuse if Stefan ordered him to do anything too crazy or cruel. Sadly, Ciara will discover she was wrong about that. When she learns Ben kidnapped Gabi Hernandez (Camila Banus) for Stefan, she’ll inevitably worry that he’s still got some darkness in him.

Ciara will also find out Ben schemed with Claire Brady (Olivia Rose Keegan) at one time. They were trying to break up Ciara and Tripp, so Days spoilers that news won’t go over well. Ciara will feel manipulated and upset over all the secrets. She thought Ben was being open and honest with her, but she’ll see that wasn’t exactly the case.

Nevertheless, it seems Gabi’s kidnapping will remain the biggest issue. Days of Our Lives spoilers say a major fight will erupt. Ciara may point out that Stefan could’ve killed Gabi. If Stefan had actually murdered her, Ciara may think Gabi’s blood would’ve been on Ben’s hands. Just because he didn’t whip out a necktie doesn’t mean he’s innocent here.

Days of Our Lives spoilers say Ciara will eventually leave town for a while. She’ll decide to visit Theo Carver (Kyler Pettis) in South Africa, so she’ll officially be on a break from Ben. Can they get their relationship back on track when she returns?

It seems likely, but Ciara’s comeback will also bring some bombshells. DOOL viewers will see an exciting February sweeps storyline for “Cin.”

Are you looking forward to the twists and turns ahead? We’ll give you updates as other Days details emerge. Stay tuned to the NBC soap and don’t forget to check CDL often for the latest Days of Our Lives spoilers, updates and news.