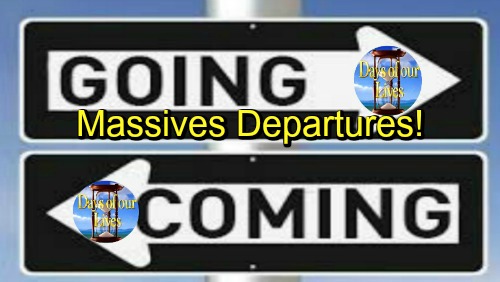 Days of Our Lives (DOOL) spoilers reveal that we’ve got some comings and goings news to pass along. There’s certainly a flood of departures to talk about. Several cast members either just exited or will be heading off canvas this week.

Rex (Kyle Lowder) failed to reunite with Sarah (Linsey Godfrey), so he decided to leave town for a while. He’ll visit Mimi (Farah Fath) and Emily, but don’t worry. Days of Our Lives spoilers say Rex will return. He’ll get involved in some other hot storylines down the road, so sit tight and prepare for some juicy drama.

Next, we have Wyatt (Scott Shilstone). He was terrified after Ben (Robert Scott Wilson) spooked him not once, but twice. It turns out Wyatt opted to leave Salem and avoid any more run-ins with the reformed killer. Wyatt never quite trusted that reformed part!

Other Days of Our Lives spoilers say Marci Miller will finally leave the role of Abigail behind. She’ll exit on November 19, but she’ll go out with a bang. DOOL fans won’t want to miss the intense showdown between Abigail and Gabi (Camila Banus).

Fortunately, the character isn’t going anywhere. Abigail will be offscreen at Bayview for just a bit, but Kate Mansi will reprise the role starting November 29. Days of Our Lives viewers won’t want to miss this epic comeback.

In the meantime, there’s one more goodbye to discuss. Paul (Christopher Sean) recently broke up with Will (Chandler Massey), so he’ll want to get away from the pain of Salem and move on. He’ll get choked up as he bids John (Drake Hogestyn) and Brady (Eric Martsolf) farewell.

Paul’s going to miss them, but he’ll be able to hang out with his mom once he lands in San Francisco. She’s undoubtedly feeling pretty neglected by now. Plus, there’ll be a treatment center that has exactly what Paul needs. With any luck, this move will get him up and walking again.

Days of Our Lives spoilers say Paul will meet a handsome physical therapist before he departs. It looks like Luke (Chido Nwokocha) will escort Paul on his plane and give Paul some hope his romantic future. It’s always nice when an exit isn’t a downer!

That’s it for comings and goings. We’ll give you updates as other Days details emerge. Stay tuned to DOOL and don’t forget to check CDL often for the latest Days of Our Lives spoilers, updates and news.