Days of Our Lives Spoilers: Sonny Returns To Salem – But Leo’s Marriage Blackmail Stands In Way of WilSon Reunion 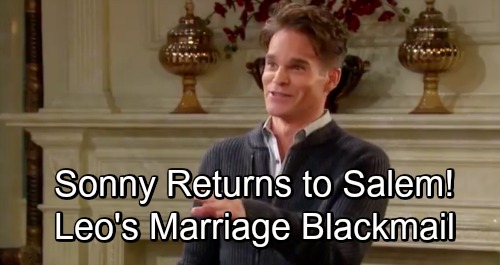 Days of Our Lives (DOOL) spoilers tease that Will (Chandler Massey) will be heartbroken to learn that Sonny (Freddie Smith) has left Salem. Apparently not being able to be with Will was too much for Sonny to handle, and he split town. But the good news is that he won’t be gone for long; he’ll return on a new DOOL episode, Wednesday November 21, and WilSon will live again.

But their reunion will be fraught with problems. First off, Victor (John Aniston) is not going to be happy about Will and Sonny getting back together. He’ll be their first obstacle to deal with. Exactly what Victor’s problem with WilSon is remains to be seen, but he’ll have a strong objection.

Days spoilers say that Victor will keep the two from reuniting, and that Justin (Wally Kurth) and Adrienne (Judi Evans) will be furious with Victor over the situation. But it looks like the problem will eventually get resolved, as Will and Sonny will reunite.

But Victor won’t be WilSon’s only obstacle to happiness. Leo (Greg Rikaart) will also be back on the scene and will shock the heck out of Will and Sonny. They thought Leo was dead and gone, but he’ll reappear very much alive and just as devious as ever.

According to Days of Our Lives spoilers, Leo will demand that Sonny marry him, or else he’ll go to the press about his “murder” and coverup. That sort of news would ruin Sonny’s chances of ever becoming Titan’s CEO ever again and could seriously hurt Titan’s business.

It looks like Leo will have the upper hand for now, and Will and Sonny will need to really think about the best way to handle the situation. Obviously, Sonny doesn’t want to marry Leo. Could a payoff be on the horizon for Leo?

How do you think WilSon will get around Leo’s blackmail? Stay tuned to DOOL and don’t forget to check CDL often for the latest Days of Our Lives spoilers, updates, and news.