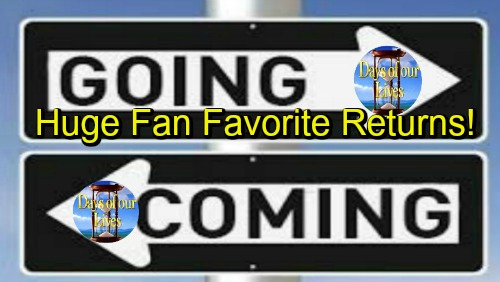 Days of Our Lives (DOOL) spoilers tease that we’ve got some comings and goings news to pass along. For starters, we should talk about the return of Mimi Lockhart (Farah Fath). She’ll arrive in Salem this week on a mission to find some answers.

Mimi knows how sneaky her mom can be, so she’ll track Bonnie (Judi Evans) down and start interrogating her. Lucas (Bryan Dattilo) was thrown by the news that he fathered Bonnie’s child, but he’ll start to warm up to the idea soon. He obviously doesn’t like that he’s now tied to Bonnie, but he’ll enjoy bonding with the kid.

However, Lucas may not want to get too attached. Days spoilers say Mimi will have doubts about Bonnie’s side of the story. She’ll realize the DNA test results point to Lucas being the father, but she’ll still be suspicious. In a town like Salem, you just can’t trust the facts! You can catch Mimi’s latest run starting October 5.

Other Days of Our Lives spoilers say Eric (Greg Vaughan) will head off to find Nicole (Arianne Zucker). After Maggie (Suzanne Rogers) confesses to lying, she’ll reveal that she indeed knows where Nicole’s staying. Eric will get the info he needs and rush over to see his soul mate. He’ll beg Nicole to tell him it’s not too late to be together.

Like Mimi, Nicole’s first airdate back will be October 5. Her comeback will be short-term, but DOOL viewers will still see plenty of drama. During the week of October 8-12, Nicole and Eric will have a steamy sex session. Alas, their reunion will be brief. Since Nicole won’t remain on canvas, there’s just no way for them to be together permanently. At least “Ericole” fans will get some hot moments!

Xander (Paul Telfer) will also make his return pretty soon. He’ll make trouble for Nicole since he’s got that incriminating recording. Can Nicole avoid exposure and stay out of prison? Eric will undoubtedly do whatever he can to make sure of it. Days of Our Lives spoilers hint that Xander could cross paths with some other surprising Salemites, too. DOOL definitely has some shockers in store.

That’s it for comings and goings! We’ll give you updates as other Days details emerge. Stick with the NBC soap and don’t forget to check CDL often for the latest Days of Our Lives spoilers, updates and news.