Days of Our Lives Spoilers: Comings and Goings – Sami and Kristen Return for a Faceoff – Ted Exits DOOL, But Comeback Looms 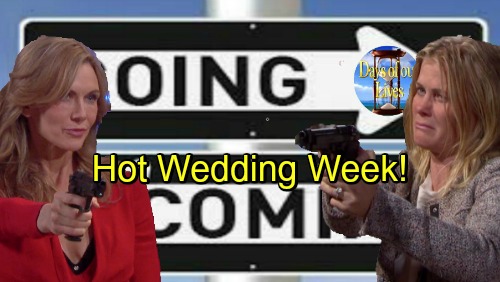 Days of Our Lives (DOOL) spoilers tease that we’ve got some comings and goings news to pass along. Some long-awaited returns are finally here! First, Shawn (Brandon Beemer) and Belle (Martha Madison) will be back on the scene. They’ve been living in Hong Kong, but they’ll make a return trip to Salem for John (Drake Hogestyn) and Marlena’s (Deidre Hall) nuptials.

Belle will agree that the circumstances aren’t ideal, but it looks like she’ll be able to calm Shawn down a bit. Ciara and Claire are both adults. If they want to let a reformed serial killer live at the loft, they have a right to do so. Once they’ve accepted the situation, they can focus on wedding chaos!

Stacy Haiduk will make her debut as two familiar characters this week. For starters, she’ll show up as the crazy and lovable Susan. Although Susan can be pretty nutty, she’s got a softer side as well. Days of Our Lives spoilers state that Susan will send “Jarlena” a present and try to make amends. She’ll also reach out to Will (Chandler Massey) and hope to establish some peace between them.

Susan’s bachelorette party appearance will be a ton of fun, too. DOOL fans can expect a spooky tarot card reading and some worried warnings. Once the wedding kicks off, we’ll get to see Haiduk’s version of the infamous Kristen DiMera. However, Sami’s (Alison Sweeney) arrival will set the stage for Kristen’s grand entrance. She’ll seem drunk as she slurs strange comments and falls down the aisle.

After Kristen appears, a risky faceoff will get underway. Sami and Kristen will pull guns on each other, which sounds like a terrible idea. That’s especially true since Sami’s probably been drugged. Pointing at the right target should be difficult for her in this state.

Days of Our Lives spoilers reveal that Marlena will take a bullet in the confusion, so don’t miss the stunning aftermath. We should also mention an upcoming departure. Once Ted (Gilles Marini) finishes his showdown with Kate (Lauren Koslow), he’ll be exiting the canvas.

However, Ted fans should just be patient. He’ll be back down the road, so someone will likely need a good lawyer. Perhaps Eric (Greg Vaughan) will give Ted a call for Nicole (Arianne Zucker)! That’s it for comings and goings. We’ll give you updates as other Days details emerge. Stick with DOOL and don’t forget to check CDL often for the latest Days of Our Lives spoilers, updates and news.