Days of Our Lives Spoilers: Comings and Goings – Shawn and Belle’s Return – DOOL Wants Eileen Davidson Back as Kristen 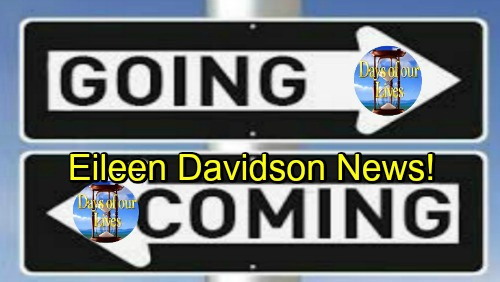 Days of Our Lives (DOOL) spoilers tease that we’ve got some comings and goings news to share. For starters, two DOOL characters are headed off canvas. Theresa (Jen Lilley) will pull off a victory at the custody hearing, so she’ll be able to take Tate (Colin and Kyle Schroeder) wherever she wants. After Theresa learns Kimberly’s (Patsy Pease) cancer has returned, she’ll plan on moving to California.

Brady (Eric Martsolf) will be crushed as he hugs his son and tells him goodbye. Tate will miss his dad, but at least he’ll have a chance to bond with his mom again. Theresa’s crazy about the tot, so this should be good for them. As for Brady, you might say it’s karma for being so nasty to Nicole (Arianne Zucker).

Brady wasn’t exactly super sympathetic to Theresa when she first returned either. He needs to be a little less selfish, so maybe he doesn’t deserve our tears! Jen Lilley’s last airdate will be July 19, so that’ll mark the end of the Schroeder twins’ Days run as well.

Other Days of Our Lives spoilers say Shawn (Brandon Beemer) and Belle (Martha Madison) will be back later this summer. They’ll stick around for a couple months, so that’s great news. Look for this popular duo to return around the end of August.

We should also address an interesting opportunity for Days of Our Lives. Eileen Davidson plays Ashley Abbott on The Young and the Restless, but she’ll be departing the show in September. She wants to spend more time with her family, but that doesn’t mean all soaps are off the table. Could Davidson land back on Days as Kristen DiMera?

Stacy Haiduk (ex-Patty Williams on Y&R) filled in for Davidson when she was unavailable, but it seems she’s finished filming now. That leaves the door wide open for Davidson to reclaim her spot as Kristen. Soap Opera Digest turned to a Days insider for more info. He or she insisted the timing would be perfect in light of some hot stories that are cooking.

This insider also noted that “there have been additional discussions about bringing Kristen back into the DiMera fold.” Days would “love to have Eileen again, so let’s hope they can make it happen. That’s it for comings and goings. We’ll give you updates as other details emerge. Stay tuned to DOOL and don’t forget to check CDL often for the latest Days of Our Lives spoilers, updates and news.