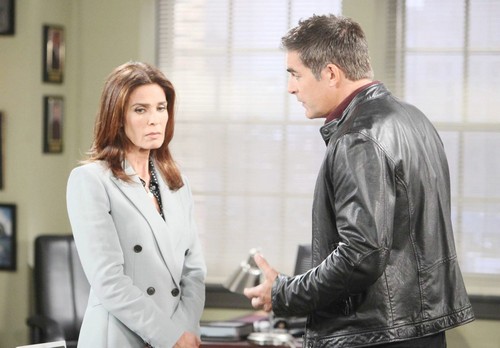 Days of Our Lives (DOOL) spoilers reveal that one NBC soap star is making his debut on a different platform. Days viewers haven’t seen as much of Rafe (Galen Gering) since his secret blew up and Hope (Kristian Alfonso) left town. However, you can catch Rafe’s portrayer on Netflix pretty soon. Gering has a fun appearance coming up on The Joel McHale Show.

This marks the first season of McHale’s new program, but it might seem familiar to fans of McHale’s previous show, The Soup. The Joel McHale Show is a revamped version, but it follows the classic format. Netflix’s description says, “Trending news, pop culture, social media, original sketches and more come together in host Joel McHale’s new weekly comedy commentary show.”

Gering mentioned his upcoming involvement in an episode via Twitter. He offered quite a tease in his brief announcement. Gering said, “For those of you that have Netflix, watch the @joelmchale show this Sunday and you’ll be able to see me turn @KevinRahm into the smartest man in history!”

It sounds like Gering’s gig will bring plenty of laughs for anyone who wants to check it out. If you don’t have Netflix or this show doesn’t appeal to you, don’t worry. Gering’s just doing a brief popup as a guest. It won’t affect his role on Days. DOOL watchers will continue to see Rafe in Salem, so there’s no need to worry if he’s one of your favorites.

Days of Our Lives spoilers say Hope will return from her Hong Kong trip next week, so Rafe will get back in the action as well. He’ll be devastated when Hope admits she wants to end their marriage. Nevertheless, Rafe will resolve to prove he’s worthy of her love. He’ll want to show Hope how much she means to him, but winning her over could be a major challenge.

Rafe will have to put some serious work into this, so Days of Our Lives fans will want to stay tuned for all the ups and downs. We’ll give you updates as other details emerge. Stick with DOOL and don’t forget to check CDL often for the latest Days of Our Lives spoilers, updates and news.