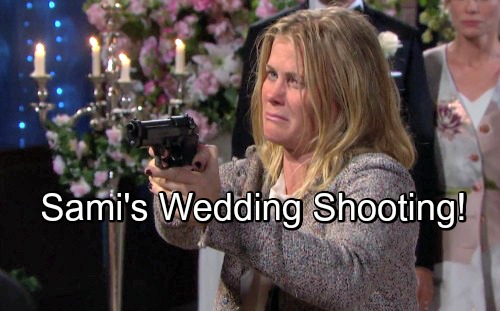 Days of Our Lives (DOOL) spoilers tease that Sami’s (Alison Sweeney) return will lead to questions and bombshells. She told Marlena (Deidre Hall) that she’d rather avoid Salem right now. Since everyone knows about her hookup with Rafe (Galen Gering), Sami claimed she didn’t want to face Hope (Kristian Alfonso) and deal with all the backlash.

Of course, that doesn’t sound like the Sami we know and love. She never backs down from a fight! John (Drake Hogestyn) and Marlena thought Sami’s choice was pretty puzzling. They’ll be even more puzzled when Sami decides to show up anyway. She’ll disregard her previous RSVP and take center stage at the ceremony.

Days of Our Lives spoilers say Sami’s appearance will catch everyone off guard. She’ll be dirty and disheveled, so that’s another clue that something’s off. Sami’s apparent drunkenness will add to the drama. She’ll slur her words a bit and shout about stopping all this

As John gets agitated, Sami will be confronted by some of the wedding party. They’ll wonder what her problem is, but she won’t really be able to convey what’s going on. Days spoilers state that Eric (Greg Vaughan) will step up to help. He’ll suggest that Sami should take a walk with him so John and Marlena can marry in peace.

However, Sami won’t stand for that. She’ll start spouting comments that don’t make any sense, so everybody will see that she’s really out of it. At that point, this DOOL wedding will take a perilous turn. That’s most likely when Sami will pull out a gun and leaves everyone in shock. Shots will be fired before this ceremony wraps up, so Marlena should be afraid…VERY afraid!

John and Marlena won’t be the only characters who face some wedding surprises. Steve (Stephen Nichols), Kayla (Mary Beth Evans), Eric, Jennifer (Melissa Reeves), Will (Chandler Massey) and Sonny (Freddie Smith) will all be profoundly affected by the events that unfold. We should note that Kristen (Stacy Haiduk) and Susan (Stacy Haiduk) will be major players in next week’s turmoil.

Kristen have something to do with Sami’s wild outburst as the weekly promo below for August 20-24 as the two have guns drawn on each other – or at least that’s what Sami sees! Has she been programmed or given some sort of drug?

Will Sami shoot Marlena as DOOL buzz has been predicting? Between Sami’s meltdown and the ceremony’s other exploding secrets, this wedding will be one for the Days history books!

Days of Our Lives fans will want to tune in for next week’s nightmare nuptials. We’ll give you updates as other news comes in. Stick with the NBC soap and don’t forget to check CDL often for the latest Days of Our Lives spoilers, updates and news.