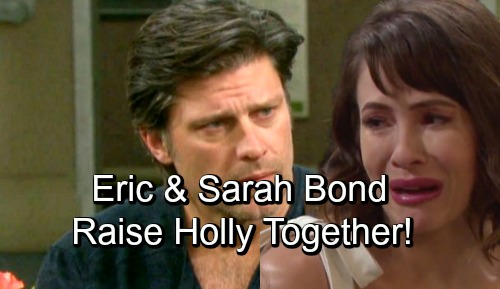 Days of Our Lives (DOOL) spoilers tease that Eric (Greg Vaughan) will be finding his footing in the coming days. He’s just back from Nashville where Nicole (Arianne Zucker) died, and he’s been walking around in a daze. He’s been processing what happened, plus he’s got Nicole’s daughter Holly to think about.

Eric really needs someone to talk to. He’s got Sami (Alison Sweeney), but she’s distracted with her own drama with EJ (last played by James Scott) and will soon be leaving Salem with him. And Eric’s still at war with Brady (Eric Martsolf), so Brady’s out as a source of comfort as well.

But there is someone who Eric will be turning to soon, and that’s Sarah (Linsey Godfrey). Sarah was deeply affected by Nicole’s death. Viewers never saw Sarah and Nicole interact on screen, but the two were quite close. Sarah will be grieving Nicole as well, and she and Eric will have that in common

Sarah also knows Holly, and Days spoilers say that she’ll step in as a source of help for Eric as he deals with Holly and the absence of Nicole. Sarah feels a bond with Holly, and it makes sense that she’d want to help care for her now that Nicole’s gone.

Eric will also be of help to Sarah as she struggles with the loss of her relationship to Rex (Kyle Lowder). She’ll be grieving that loss as well as the loss of Nicole, and she could probably use a friendly source of comfort. Days spoilers say that Eric will intervene for Sarah in a time of stress, so maybe he’ll step in when Rex inevitably tries to reach out to Sarah.

At any rate, it certainly looks like Holly will serve to bring Eric and Sarah together. Would you like to see them as a couple eventually? Stay tuned to DOOL and don’t forget to check CDL often for the latest Days of Our Lives spoilers, updates, and news.