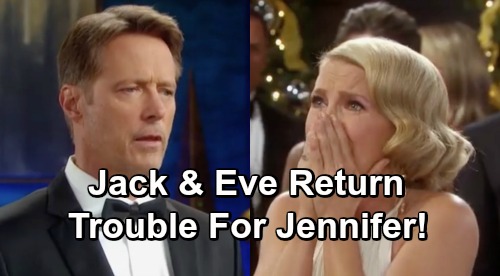 Days of Our Lives (DOOL) spoilers tease that a big return is on the horizon. Jack Deveraux (Matthew Ashford) will be back on-screen on Friday, December 28 for a New Year’s Eve Donovan re-introduction to Salem. It will certainly be a memorable comeback, and an unexpected one for Jack’s family and friends to say the least.

But there’s another comeback coming, too, and that’s Eve (Kassie DePaiva). She’ll be making her reappearance in Salem on the episode airing on Monday, December 31. And according to Days spoilers, the simultaneous comebacks will be absolutely related.

And this makes sense, if you think about what transpired when Eve left Salem a few weeks ago. Before heading out of town, Eve ran into Jennifer Horton (Melissa Reeves) and gave Jen a piece of her mind. Eve was seriously miffed that Jen spilled the beans to Eric (Greg Vaughan) about Brady (Eric Martsolf) blackmailing Nicole (Arianne Zucker). Eve wanted Jen to keep her mouth shut to protect her relationship with Brady.

And just as Eve predicted would happen, when Jen told Eric the truth about Nicole, a chain of events occurred that led Brady to break up with Eve and run off into bed with Kristen (Stacy Haiduk)…something that Eve couldn’t forgive Brady for. Bottom line, Eve blamed Jen for the whole thing, and she wants Jen to pay.

So, how does this all tie in to Jack coming back? Well, there’s the distinct possibility that when Eve left Salem a while back, she went looking for anything that could tear Jen’s life apart. What if she managed to find Jack, and Jack’s not totally himself because of the injections/treatments he must have received from Dr. Rolf (William Utay) in order to be alive?

If that’s the case, and Jack has changed or doesn’t remember who he is, then that’s something that could bring Jen some serious pain. Jack’s return may not end up being the immediately happy event that some are thinking it will be.

Do you think that Eve has a plan for Jack to somehow devastate Jen? Stay tuned to DOOL and don’t forget to check CDL often for the latest Days of Our Lives spoilers, updates, and news.