Days of Our Lives Spoilers: Sonny’s NOT Really Married – Leo Conned by a Con? 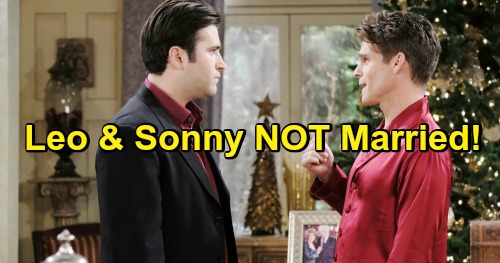 Days of Our Lives spoilers tease that Leo Stark (Greg Rikaart) and Sonny Kiriakis’ (Freddie Smith) upcoming marriage will be invalid, and that Leo will find himself outconned by a con. Abe Carver (James Reynolds) turned down Leo for a marriage ceremony, first telling him that paperwork had to be filed, and then turning him down flat after realizing who he was and what he’d done.

This provided an opportunity for none other than Sheila (Tionne Watkins) the convict, who said she’d been ordained through an online class and could perform the marriage right away but demanded cash only. Leo forked it over and they headed over to the Kiriakis home to get married to Sonny right away.

But there’s that little detail about the paperwork that Abe mentioned had to be done first that Sheila mentioned nothing about once Leo came up with the cash. That is quite likely the marriage license, which has to be signed by both parties to the marriage, and the officiant, and filed at the courthouse, usually not all on the same day.

If there is no license and nothing filed, then all Leo has is a ceremony with no legal papers to back it up. He doesn’t even have a receipt to show that Sheila took his money.

Even if Sheila had handled the marriage paperwork and filings properly, the question remains if her online ordination is legal in the state in which she is performing the ceremony. Daddy Justin Kiriakis (Wally Kurth) may want to check her ordination out, since he as a lawyer and should have access to anything he needs legally to do so.

Justin should be able to get Sonny out of this so-called marriage quite easily if he puts his mind to it. Exhibit number one: the ceremony was performed without the proper paperwork being filed at the courthouse; exhibit number two: the officiant may not have even been authorized to perform the ceremony legally.