Days of Our Lives Spoilers: Tuesday, December 18 – Julie Rushed to Hospital, Chad and Sonny Grill Gabi – Will Gets Crushing News 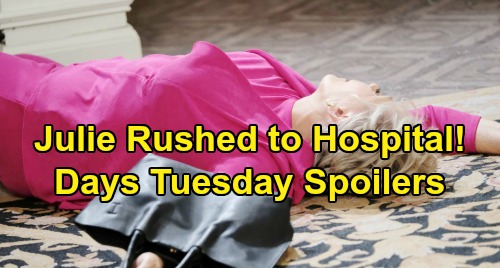 Days of Our Lives (DOOL) spoilers for Tuesday, December 18, tease that Sonny (Freddie Smith) and Chad (Billy Flynn) will rush to Julie’s (Susan Seaforth Hayes) side. After hearing part of Julie and Gabi’s (Camila Banus) fight, they found the terrible aftermath just outside the living room. Once they’re able to move past the shock, Chad and Sonny will get Julie some help ASAP.

An ambulance will be called while the guys try to keep Julie calm. Of course, Gabi will just stand there looking guilty. She didn’t shove Julie down the staircase, but she participated in a dangerous tug of war over the paternity test results. Gabi certainly isn’t blameless in what happened, but she’ll do her best to cover up the truth.

Days of Our Lives spoilers say Gabi will face Chad and Sonny’s tricky questions. She’ll tackle them carefully, but she should grow concerned when Julie tries to speak. Chad will want Julie to save her strength, but she’ll insist that there’s something he needs to know. Unfortunately, Julie will struggle to spit the words out. She’ll lose consciousness again before she can reveal Charlotte’s real paternity.

After Julie’s taken to the hospital, DOOL spoilers say Sonny will focus on another important task. Leo (Greg Rikaart) will pressure Sonny to steer clear of Will (Chandler Massey) or else, so Sonny will have to break the bad news. He’ll meet up with Will and insist that they can’t spend time together anymore.

Since Sonny went through with the marriage, there’s no point in blowing it by angering Leo now. Sonny would be better off just concentrating on his takedown efforts and hopefully getting Leo out of the picture. Will’s going to be disappointed over cutting off all contact, but maybe he can get a plan of his own cooking soon.

Other Days spoilers say Hope (Kristian Alfonso) and Rafe (Galen Gering) will have a heated argument. When Rafe revealed how he found Hope, she wasn’t happy about it. Rafe brought Lani (Sal Stowers) and Eli (Lamon Archey) into this mess. He also followed Hope’s credit card trail, so she thinks she was treated like some random perp.

Days of Our Lives spoilers state that Rafe will explain his perspective. Hope’s upset about his cheating suspicions and the lack of trust, but Rafe may think he was justified since Hope lied repeatedly. Regardless, he’ll try to get their relationship back on track. Since Ted (Gilles Marini) clearly wants Hope as more than an ally, Rafe’s mission could be tougher than he expects!

DOOL fans won’t want to miss Tuesday’s exciting scenes. We’ll give you updates as other Days details emerge. Stay tuned to the NBC soap and don’t forget to check CDL often for the latest Days of Our Lives spoilers, updates and news.